Steve Spagnuolo is a well-known American football coach. He has been working as a coach for more than four decades. Steve is currently working as the Defensive Coordinator for the Kansas City Chiefs since 2019. Spagnuolo has been part of two Super Bowl Champion teams of XLII and LIV.

Steve started his career as a football player in High School and then in College. Upon completing his undergraduate, He worked as an assistant for the University of Massachusetts and completed his master's degree. Spagnuolo moved to Lafayette University and worked as Defensive Line coach & Special teams coach for three seasons, from 1987 until 1991. Steve moved to Barcelona Dragons as their Defensive line coach & special teams coach. 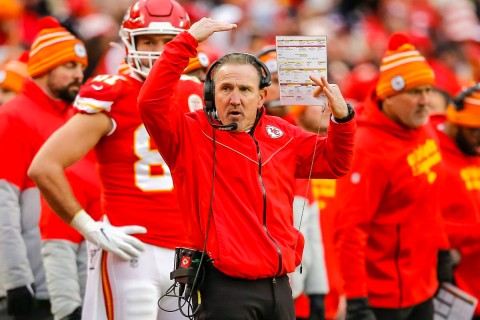 Steve gives instructions to his players in a match SOURCE: Arrowhead Pride

Steve joined the University of Maine as Defensive backs coach and then moved to Rutgers. Until 1999, The coach moved to a few more universities and then was hired by NFL franchise Philadelphia Eagels as their defensive assistant. Spagnuolo worked as defensive backs coach and Linebackers coach until 2006. He then moved to New York Giants as their new defensive coordinator. The same year, The Giants won the XLII Super Bowl.

In 2017, The giants promoted steve as their interim head coach but were not retained at the end of the season. In early 2019, Kansas City Chiefs signed him as their new defensive coordinator, and his team won the LIV super bowl. He has been working for almost four decades in the American football industry and is the longest-working person.

Steve is married to his longtime girlfriend, Maria Spagnuolo. The love birds have been married for more than fifteen years. The duo walked down their wedding aisle in 2005 at a private wedding ceremony. Some online sources claim them to have five children, but both of them have not shared a word. It's been more than a decade since their marriage, but there has been no rumor of the couple having ups and downs in their married life.

Steve has an estimated net worth of more than $10 Million. He has earned most of his net worth through his NFL and American football career. Spagnuolo earned $2 Million as his salary with the Giants in 2007. In 2008, Steve signed a four-year contract worth $11.5 Million with the Rams. As per sources, He has had an annual salary of roughly $2 Million with the Chiefs since 2019.