Dave Aranda is a rising American football coach. He is currently working as the head coach for Baylor University at the Big 12 Conference. Dave started his coaching career in 1995 as an assistant coach in a High School. Aranda served as the Defensive Coordinator for the LSU Tigers until 2019.

Dace Aranda was born David Christopher Aranda on September 29, 1976, in Kern County, California. He is among the two children born to Paul Aranda and his wife, Marguerite Aranda. His parents immigrated from Mexico.  After graduating from Redland High School, Dave enrolled at the California Lutheran University.

Dave Aranda has an estimated net worth of more than $5 Million. He has been making most of his net worth through his two-decade career as a coach in numerous leagues and teams. In early 2021, Aranda joined Baylor but had not shared a word about his contract with the public. As per sources, The Head Coach has an annual salary of more than $4 Million. Dave was the Highest paid assistant coach while working for the Louisiana State University. In 2016, He joined the LSU Tigers as defensive coordinator with a salary of $1.3 Million. Aranda was making merely $520,000 working with the Wisconsin Badgers. The coach extended his contract for four-year with a base salary of $2.5 Million. In 2018, Numerous top universities tried to hire him as their new head coach but refused.

Dave is very much at the peak of his career and will be adding millions to his net worth in the future.

Yes, You read that right. Dave is the proud father of three children. Aranda is successful in his marital life along with his coaching career. Dave walked down his wedding aisle along with Dione in the early 2000s. The love birds had a private wedding ceremony, much of which is under the radar. 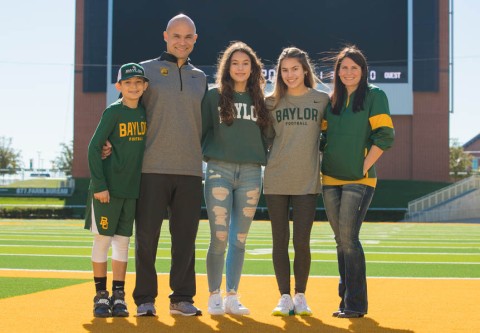 Dave and Dione welcomed their first child, A daughter, Jayden, in 2005. Then in 2007, The duo was blessed with a second daughter, Jordan. In 2010, The family of four extended to five with the birth of a son, Ronin. The head coach is living a happy married life along with his wife and his children. He often takes his children to watch his games.

Dave played football in High School and University but retired due to injuries. In 1995, he joined High School as their assistant coach. Aranda completed his master's degree from Texas Tech University and worked as a graduate assistant under Mike Leach. In the next few years, The coach moved to numerous universities working as a defensive coach.