Stephen Todd Alford a.k.a. Steve Alford is an American basketball coach, retired player. He currently serves as the head coach of the University of Nevada's Nevada Wolf Pack of the Mountain West Conference and most recently, he was the head coach of the UCLA Bruins men’s basketball team. As a player, Alford was picked 26th overall in the 2nd round of the 1987 NBA Draft by the Dallas Mavericks. After four years, he retired as a player and became a college basketball coach. He has coached Manchester, Southwest Missouri State, Lowa, and New Mexico, before landing at UCLA. He was recently fired by the Bruins in late December 2018 after the 7-6 record this season.

Alford, who is married and has three children with his wife, was recently in the limelight after being suspected as the top contender for the head coach job of Arkansas Razorbacks after the exit of Mike Anderson. As of 2019, his annual salary was reported $2.6 million but is not involved in any coaching job currently.

Who is Steve Alford Married to?

Steve Alford, 55, is a married man. He exchanged the wedding vows with his childhood sweetheart, Tanya Alford, in 1987. The two knew each other for a very long time since they attended the same grade school in New Castle. The couple started dating in their junior year of high school and have been together since then. 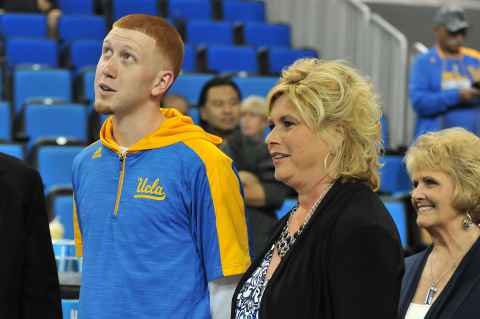 Moreover, the pair is blessed with three children: sons Kory, 26, and Bryce, 23, and a daughter Kayla Alford, 21. Among the three, Bryce and Kory are a professional basketball player and currently play for the Bruins.

To date, there are no rumors about divorce and extra-marital affairs. Thus Alford is living a blissful life with his spouse and their children.

Alford is one of the highest-paid college basketball coaches. In 2018, his salary was $2.6 million being the coach of the UCLA Bruins men’s basketball team. He recently signed a contract with the Universit of Nevada worth $11.6 million for 10 years. He reportedly earned $500,000 as his annual salary in 2020.

Earlier, he signed to 7-year $18.2 million worth contract with UCLA with an annual average salary of $2.6 million a year while Mike Krzyzewski of Duke was the highest-paid college coach with an annual salary of $8.9 million. He was the 23rd highest-paid college coach in 2018. He is not signed to any team currently so he has no earning at the moment.

Nevertheless, he has not disclosed the exact figure of his net worth but looking at his career, his net worth is assumed to be no less than the seven-digit figure. Apart, he owns a lavish mansion in Coralville, Lowa.

Steve Alford was born on 23rd November 1964, in Franklin, Indiana, to Shran Alford and Sam Alford. His birth sign is Sagittarius. As per nationality, he is an American and belongs to white ethnicity. As a three-year-old, he learned to count by watching the numbers tick off the scoreboard in Monroe City, where his dad coached the high school team.

At his nine, Alford attended a basketball camp put on by Coach Bob Knight. Eventually, the Alford family settled in New Castle, Indiana, where he played on the New Castle Chrysler High School basketball team with his dad as a coach.

During his freshman year in high school, Alford averaged a point a game but then averaged 18.7 the following season. As a senior in 1983, he averaged 37.7 points per game and received the Indiana Mr. Basketball award before the three-point line was even implemented. Furthermore, he also earned a gold medal as a member of Bob Knight’s U.S. Olympic team.

Just nineteen-years-old and sophomore year, Alford was selected to play on the U.S. basketball team for the 1984 Summer Olympics. He averaged 10.3 points per game, was 2nd in assists, as well as shot .664 from the field.

At the 1984 games, Alford along with his teammates went to win the gold medal, having played alongside Patrick Ewing, Wayman Tisdale, Sam Perkins, Chris Mullin, and Michael Jordan.

According to the source, Alford has recounted that during the Olympic training camp, Jordan bet him $100 that he would not last four years on Knight’s Indiana team.

In the 1987 NBA Draft, Alford was picked 26th by the Dallas Mavericks. He played in the NBA for four seasons, mostly with the Mavericks, though he spent a portion of one season with Golden State Warriors. Over his playing career, Alford started three games and recorded 744 points, 176 assists as well as shot free throws with an accuracy of 87 percent.

Alford joined as the head coach of the UCLA Bruins. He signed a 7-years $18.2 million contract on 30th March 2013, replacing the fired Ben Howland. He was fired by the Bruins on December 31, 2018, after his poor 7-6 record this season.

Alford might fill the void of the head coach job at the University of Arkansas after Mike Anderson was fired in March 2019.

His coaching career highlights and awards are listed below.