Simone Manuel is an American competition swimmer, who currently represents the Stanford University Team. Manuel is the first African-American lady swimmer to win Olympic gold medal in 2016 Summer Olympics. Besides, she helped Stanford team win the NCAA championship in women's swimming and diving in 2017 and 2018.

The resident of Sugar Land, Texas, Manuel reportedly earns around $40,000-$60,000, as her yearly salary. As of 2018, she reportedly has an estimated net worth of over $3 million. Currently, Simone has not been dating anyone and is possibly living a single life.

Simone Ashley Manuel was born on August 2, 1996, in Sugar Land, Texas to father Marc Manuel and mother Sharron Manuel. She holds an American nationality and belongs to African-American ethnic group. Further, she grew up with two older brothers named Chris and Ryan.

Happy Mother’s Day to a true Queen. God has really blessed me with the best. Thank you for always supporting me and being my biggest cheerleader. Thank you for being so selfless, loving, caring, and going above and beyond in everything you do. Oh, thanks for giving me your good looks, too. I love you! ??

After graduating from Fort Bend Austin High School in 2014, Manuel joined Stanford University in California, where she is the member of Stanford Cardinal women's swimming team.

Simone Manuel Net worth and Salary

Simone Manuel, the former six-time NCAA Champion has an estimated net worth of $3 million. As of 2018, the talented swimmer receives an annual salary of $40,000-$60,000. Considering her performance,  Manuel's net worth is expected to increase in upcoming years.

Recently in 2018, she signed a deal with Tyr Sport, Inc, an American manufacturer with fellow Stanford teammates Katie Ledecky and Lia Neal. It is estimated that the endorsement deal will add a huge sum of amount to her net worth.

She currently lives in Sugar Land, Texas along with her family, and has a beautiful home there.

At the age of 11, Simon started swimming with her local club, First Colony Swim Team. Her first international victory was winning a gold medal after participating in the 2013 World Aquatics Championships in Barcelona.

After entering Stanford in 2014, she became a member of the Women's Cardinal team and broke several school records. 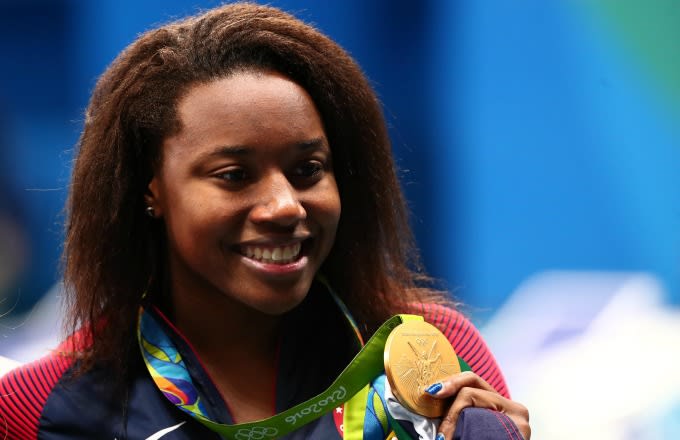 In 2017 World Championship, Manuel alongside Comerford, Dressel, and Nathan Adrian set a world record of 3:19.60. Also, she broke the 2012 world record of 3:52.05 set by Missy Franklin, Rebecca Soni, Dana Vollmer, and Allison Schmitt.

In the 2016 Summer Olympics, Manuel became the first African-American to win a gold medal in an individual swimming event.

Regarding personal life of Simone Manuel, she is 22 years as of 2018. Further, her star sign is Leo. From an early age, Simone began competing in several swimming tournaments. In 2016, after winning a gold medal in 2016 Summer Olympics, she became the first women to win such medal.

Farewell to the greatest.

Holding several national and international records the 21-year-old diva is currently not involved in a romantic relationship. There is not detailed news of her having a boyfriend or any other affairs and relationships. It appears that she is entirely focused on her career.

Happy Birthday to my absolute best friend! I’m more than blessed to have you in my life. ?? (sry... your baby pictures are adorable)

Apart from that, like every other youngster, Simon is also very close to her friends and they are often seen vacating, hanging out and chilling together.

Some of the facts of the rising athlete are: