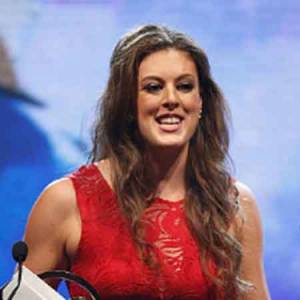 Allison Rodgers Schmitt is an American championship swimmer who is best known for her performance at 2012 summer Olympics in London where she won three gold medals, one silver, and one bronze. She is an eight-time Olympic medallist.

Allison has won seventeen medals in major international competitions in total. She was a four-time National Collegiate Athletic Association (NCAA) national champion in the 200- and 500-yard freestyle swimming events during college.

Allison Rodgers Schmitt was born on June 7, 1990, in Pittsburgh, Pennsylvania to Ralph and Gail Schmitt. She was brought up in Canton Michigan along-side her four siblings.

She attended Canton Charter Academy for elementary and middle school. She graduated from Canton High School in Canton Township, Michigan in 2008. Allison started swimming at the age nine following her elder sister footsteps.

Schmitt swam with the Ann Arbor Swim Club in Arbor, Michigan from age 11 through 14. Schmitt moved to Athens to enroll in University of Georgia, major psychology and minoring in childhood and family development. Later she joined coach Jack Bauerle’s  Georgia Bulldogs swimming and diving team.

When she was in the junior year of high school at the 2007 Junior National Team Competition in Orlando, Florida, she showcased her speed and talent. She then began her training under Bob Bowman alongside Olympian Michael Phelps.

Net worth of Allison Schmitt

The 27-year-old swimmer has a net worth of $2 million although her earning is not revealed. Her swimming career is the prime source of her net worth. Besides, she adds the huge amount from her lucrative endorsement deal with Adidas.

Back in 2015, she signed an endorsement deal with a cat stuffs production company named Line of Cat Toys.

Regarding her relationships or married life, there is no information. Allison seems to be focused on her career rather than indulging in these things.

She was once rumored to be dating Grant Hackett. Grant is an Australian swimmer and the 200 and 2004 Olympics gold medalist. The two were introduced to each other by an American swimmer Michael Phelps and are often seen sharing photos together on Instagram.

In December 2012, they were seen taking helicopter ride together in Melbourne. Denying the rumor back in MAy 2017, Schmitt said:

'Allison has been a good friend of mine for years through swimming. There is nothing else further there.'

Grant was previously married to Candice Alley and share twin children named Jagger and Charlize. He had a divorce with his wife in 2012.

Due to the increased public attention, Schmitt started suffering from depression resulting in bad swimming, leading her to not qualify for various international competitions. She then started training under Bowman at Arizona State University, preparing for the 2016 Summer Olympics.

She participated in NCAA competition in her freshman, sophomore and junior year. She became a four-time NCAA national champion by winning the 500-yard freestyle in 2009, 2010, and 2011.

She took her senior college year off and trained with Phelps and Bowman full time preparing for the 2012 Summer Olympics in London. She returned to university after the 2012 summer Olympics to complete her senior year of college.

Schmitt won a bronze medal in the 4*200-meter freestyle relay along with Natalie Coughlin, Caroline Burckle, and Katie Hoff during the 2008 Summer Olympics. The American team ended with a time of 7:46:33. She also participated in the 200-meter freestyle, but could not advance past the semi-finalist and finished at the ninth position.

She won silver in her second event the 200-meter finishing behind world record holder Federica Pellegrini by 1.98 seconds. And in the final, the American team were placed in second to China with the time of 7:42.56.

Schmitt obtained a gold medal in the 4*200-meter freestyle at the 2011 World Aquatic Championships. She also competed in the individual 200-meter and finished sixth in the final.

During the 2012 summer Olympics in London, she won five medals including three gold, one silver, and one bronze. Schmitt won her first individual Olympics medal career, a silver, in the 400-meter freestyle, and set an American record for the event.

Schmitt earned her second gold after passing Australian Alicia Coutts in the 4*200-meter freestyle relay with a split of 1:54.09 as the anchor leg.

The Pan American games in Toronto marked her first international tournaments since the 2012 short-course World Championships. She earned a gold in the 200-meter freestyle, and also won a silver in the 4*100-meter freestyle relay.

Schmitt earned her fourth gold medal, and eight Olympic medals, by swimming in the finals of the 4*200 meter freestyle relay along with Leah Smith, Maya DiRado, and Katie Ledecky. Schmitt was named one of the captains of the U.S Olympics team. She became the ninth American Female swimmer to appear in three Olympics.