Simon Sluga was born on March 17. 1993, in Porec, Croatia. He is very private about his parents and early life events. Sluga has successfully kept his personal life away from the reach of the media. Talking about his physical appearance, Simon stands six feet three inches tall and weighs 90 kg.

Simon Sluga has an estimated net worth of more than $1 MIllion. The player credits most of his net worth to his successful football career. Sluga has an annual salary of £291,200 while playing with Ludogorets Razgrad FC for the 2022 season. He has a weekly wage of £5,600 and is among the highest-paid player on the team. 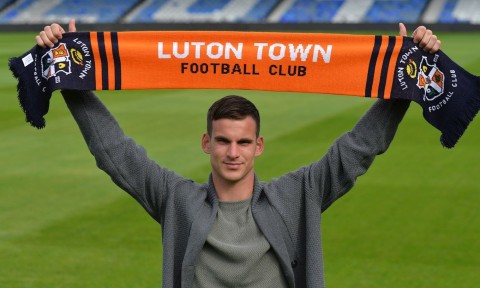 Some sources claim him to be a married man living a happy married life. There are rumors that Simon exchanged his wedding vows with his wife, Anamarija, in the mid-2020.

Simon started his youth career with Jadran Porec in the Croatian football league. He represented the club in numerous divisions and then moved to Rijeka in 2008. Sluga signed with Rijeka until his professional career and was loaned to Juventus Primavera for a season and then to Verona Primavera. The player made his professional debut with Rijeka in the Croatian football league.

Simon was loaned to Pomorac for the 2013/14 season. He appeared in thirty-one games. In his second professional season, The player was loaned to Lokomotiva. He appeared in twenty-six games for the club. Sluga signed with Spezia the following season but did not appear. Until mid-2019, Simon appeared in sixty-four games for Rijeka and then moved to Luton Town for a club-record fee of more than €1.5m (£1.34m).

Sluga signed a three-year contract with the club and had a great season. The player appeared in ninety-one games for the club. In early 2022, Simon moved to Bulgaria and signed with Ludogorets Razgrad.