Shams Charania is a known name in sports journalism, especially in the NBA. Currently, he is a reporter for The Athletics and Stadium covering the NBA. Earlier he worked for Yahoo! Sports.

Chicago native, Charania was born in 1993/1994 (age 25–26) to Pakistani immigrants. They immigrated to the U.S. from Pakistan in the early 1980s, with Shams as the oldest of three kids. His mother worked as a nurse at Skokie Hospital in the Chicago suburbs.

How Much Is Shams Charania Net Worth In 2020?

Having worked with the prolific organization, Charania has not only earned goodwill but also a tremendous sum of money. As of 2020, his net worth is approximately $0.2 million.

Not to mention, the significant source of Charania's income is sports journalism. The Senior NBA Insider makes almost $100,000 from his job.

Charania enrolled at New Trier, where was passionate about basketball and played on his middle school team in suburban Chicago. But after getting cut from his high school team, he understood his dream of playing for his beloved Bulls was over. It was there in 10th grade English class that he received a suggestion from his English teacher to give a shot in writing. Two years later, Charania decided he’d try working at the New Trier News, his school paper, in his junior year and see where it went.

While he became one of the editors for the paper’s sports section, he tried for the NBA and started a Bulls blog on ChicagoNow. As his junior year progressed, he started sending his stuff to sites like RealGM, HoopsWorld, and HoopsHype.

In 2012 he graduated and attended Loyola University in Chicago. There he majored in communications and as the first of his generation of a family born in the U.S., graduating from college is a big deal.

Aged seventeen, Shams started his sportswriting career covering the Chicago Bulls for ChicagoNow, a subsidiary of the Chicago Tribune. In 2012, he started writing for RealGM, establishing himself by reporting small transactions around the league. 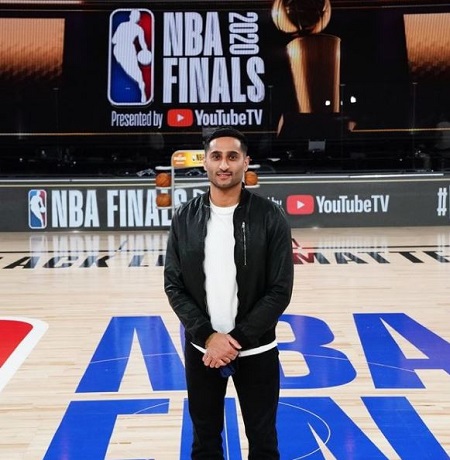 He was the first to break a number of high-profile signings in the summer of 2016, including Dwight Howard, DeMar DeRozan, Luol Deng, and Jamal Crawford. Similarly, in 2017, he broke signings by Stephen Curry, Paul Millsap, Blake Griffin, and Jeff Teague.

In August 2018, Shams joined The Athletic and Stadium.

Shams Charania, who has been in the media field for a decade is yet no ready to share his personal stuff with the public. His relationship or girlfriend has been addressed low key. There is no buzz of his dating rumors.

Additionally, his Instagram account where he has 288k followers is full of professional things. With no concrete proof regarding his love life, he is believed to be possibly single.