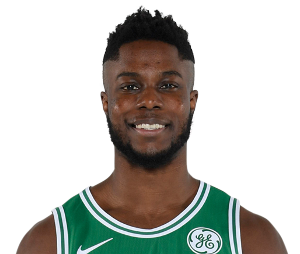 Semi Ojeleye is an American professional basketball player who plays in the National Basketball Association (NBA). As of 2019, Jesusemilore Talodabijesu "Semi" Ojeleye currently plays for the Boston Celtics as their Forward. In the first place, Ojeleye has played for his college and University teams.

Last year, Ojeleye was the 177th best - paid forward in the league. He is currently the 13th best-paid in the Boston Celtics roster list with Gordon Hayward, Al Horford, and Kyrie Irving being on the top three.

The Famous NBA star is 6 feet 7 inch in height and weighs around 109 kg. Ojeleye is not only a world-class athlete but also is a very attractive individual.

Thanking God for all the memories from this past year. I will admit these are my favorite nine, but the real blessing was in the journey. #behindthescenes #prayers #dedication #family Here is to a special 2018! #mycrew pic.twitter.com/CEXZG1lbYU

To date, there are no rumors relating to the affair of Ojeleye. He hasn't revealed anything about his personal life and girlfriend. He seems to be single but can't ignore that he might be dating someone as no reports about him has been published.

Ojeleye, age 24, has just begun his career, so he seems focused on making his name as a sky-high in his career.

Loved ones we should do this more often

Other than being a famous NBA Forward, Jesusemilore Talodabijesu "Semi" Ojeleye is pretty famous in social media.

Jesusemilore Talodabijesu "Semi" Ojeleye was born on December 5, 1994, in Kansas, the United States. He was born to parents Ernest(father) and Joy(mother) at Overland Park, Kansas. He holds an  American nationality and belongs to the Black ethnic group. Furthermore, his star sign is Sagittarius.

Besides he has a brother(siblings) named Victor with whom he grew up. Ojeleye's father Ernest is a doctor and mother, a nurse.

Later on, after completing his high school, Semi enrolled at Duke University(2013-2015) and studied there for two years. Besides, he also studied and played for Southern Methodist University(2016-17).

After the end of his junior redshirt season, Ojeleye entered his name for the NBA draft in 2017 but did not hire an agent, leaving the possibility of returning to the Mustangs.

Ojeleye, one of the 67 participants, was invited to the 2017 NBA Draft Combine. After some promising performances, he announced his commitment to the draft and finished his college career.

Ojeleye was selected in the second round by the Boston Celtics. He made his professional debut on 17 October 2017 against Cleveland Cavaliers in 102–99 loss.

The Lord says, ‘I will guide you along the best pathway for your life. I will advise you and watch over you’ Psalms? ?32:8?

He averaged 2.7 points per game during the regular season and shot 34.6 percent from the field but rose as a defensive presence. He was a starting player in Game 5 of the playoff series against the Milwaukee Bucks where he stopped Giannis Antetokounmpo to 16 points only.