Once regarded as one of the best young basketball coaches of America, Sean Miller has managed to continue his legacy that he created years ago. He is currently giving his best as the head coach of the Arizona Wildcats men’s basketball team in the Pac-12 Conference. Before his coaching career, Miller had amassed fame as a gold medalist during his time at the USA Basketball team.

Hailing from the suburbs of Ellwood City, Pennsylvania, Miller was born in 1968. He celebrates his birthday on the 17th of November every year. Likewise, he goes by the birth name of Sean Edward Miller. His father’s name is John Miller, and his mother’s name is Barb Miller. Apart from his parents, he also has a brother named Archie Miller. His brother is also a basketball player who had trained alongside him under the sight of his father, also a basketball coach.

As for his academics, he attended the Blackhawk High School located in Chippewa Township, Beaver County, Pennsylvania.

Miller’s Career: From A Player To A Coach

The Ellwood City, Pennsylvania native started his career as a point guard from his Blackhawk High School basketball team, Blackhawk Cougars. After he graduated from high school, he decided to play for Pittsburgh.

There, he played from 1987 to 1992 and managed to amaze everyone through his amazing skills. Besides, he was even regarded as the best three-point shooter in the Pittsburgh program’s entire history.

Following such accomplishments, Miller decided to use his skills as a coach and shifted his focus towards coaching. His first coaching duty came in 1993 when he was offered the job of a graduate assistant position at The Wisconsin Badgers. There, he spent two seasons, until 1995.

In 1996, he joined hands with Herb Sendek, and together they coached The NC State Wolfpack. He served the team for 5 years and eventually left the position when he was offered a better coaching position at the Xavier Musketeers men's basketball team.

During his time with the Xavier Musketeers men's basketball team, he was able to win one conference tournament championship and three A-10 regular-season championships with the team.

After his tenure with the team ended, he was signed by the Arizona Wildcats on April 6, 2009. Ever since Miller joined the team, he has never signed with another team and has continued to make records after records.

The American basketball coach has coached for different teams to this date. With that said, it must be sure that he was paid a huge sum. Well, as per some sources, it is known that his estimated yearly salary is $2.8 million. Besides, he also has endorsement deals with Nike and IMG through which he earns $400,000 annually.

Sean is an averagely paid coach while John Calipari and Mike Krzyzewski are the two highest-paid college coaches.

But that’s only his earnings. What about his net worth? Well, as per some sources, Miller has managed to accumulate a whopping net worth of $9 million.

The former head coach of the USA men's Under-19 junior national team is a married man. He has been married to his wife, Amy Miller, for a long time. Moreover, with his wife, the basketball coach is blessed with three kids, Braden Miller, Cameron Miller, and Austin Miller. 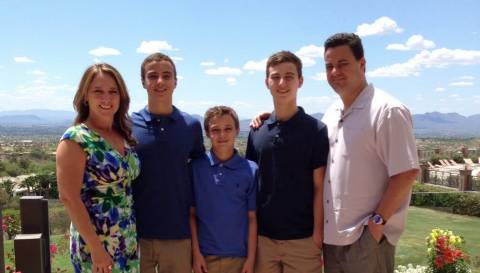 Since the birth of children, the duo has been relishing their marital life and enjoying every bit of moment with their kids.