Scotty Pippen Jr is a rising American basketball player. Scotty was born with a golden spoon in his hand. Scotty is currently in his freshman year and playing basketball for Vanderbilt University's team. He comes from an athlete family background, as almost everyone in his family plays basketball.

Scotty Pippen Jr was born on November 10, 2000, in Los Angeles, California. He is very much early in his career to earn much. Talking about Scotty's physical appearance, He stands six feet and one inch tall and weighs 77 kgs.

Source of Earnings and Net Worth

Scotty just completed his junior year with this University team. As per sources, the College pays him some amount for this game. However, The exact figure and amount are not known to the public. It's just his beginning, so; He shall be earning much more in the days to come. As of now, Scotty is enjoying his father's successful career earnings. 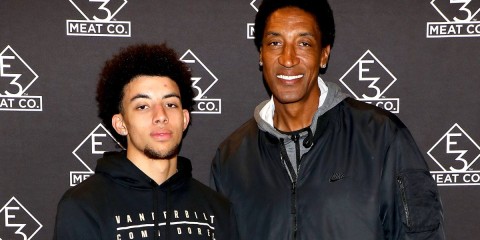 Scotty with his father attending an event SOURCE: Getty Images

Scotty's Father, Scottie Pippen, has a staggering net worth of $40 million. However, Sources claim it to be over $50 Million. Unlike several other famous player's Scotty has become successful in maintaining his portfolio. In his career that spanned for almost two decades, Pippen earned more than $100 million as his salary and prize money. In 1996, Scotty earned a good amount of $3 Million through his sponsorship deal with Nike and Ameritech Cellular TV.

Scottie started his career in 1988, singing a $2.1 million contract with Chicago Bulls for four years. He renewed the contract in 1994, raising his annual salary for more than $3 Million. In 1999, Pippen joined the Houston Rockets and signed a one-year contract for $11 Million. The following year, His pay increased, and he signed with Portland Blazers for $14 Million. Nate Robinson is another famous retired American Basketball player with a net worth of $15 Million.

Scotty started playing basketball as early as his teens. He played basketball during High School. After graduating from High School, Jr. was offered a sports scholarship from various universities, but he chose Vanderbilt University.

In his first year at the University, Scotty played 32 games and had good stats. He finished the year with an average of twenty-five points. Pippen is a wonder kid and will be seen in the NBA shortly after his graduation. His father is a great supporter of Scotty. He played along with Brandon Boston during his High School team.

Scotty is among the four biological children born to Scottie Pippen and his former wife, Larsa Pippen. His father, Scottie Pippen, is a former professional basketball player and regarded as one of the great small forward of all time. His mother is a famous television star. He has eight siblings altogether, among which only three are his own, and the other three are half-siblings. 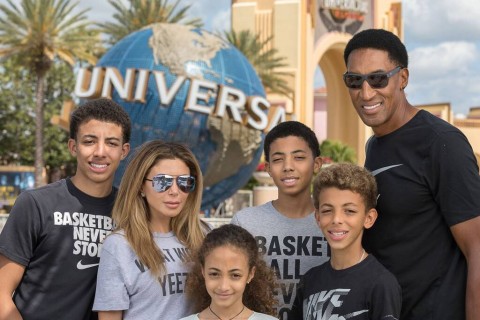 Scotty Pippen Jr with his parents and siblings SOURCE: Pinterest

In regard to Scotty's relationship status. It seems like; He is single as of now. He must be focusing on his career rather than spending time with people. He must have been aware after his parent's separation in 2018 and divorced in 2019.