George Scottie Lewis Jr., a.k.a. Scottie Lewis is an American basketball player who finished his collegiate career at the Florida men's basketball and currently is preparing for the 2021 NBA Draft. He is ranked #92 by ESPN in the best available athlete for the draft.

The Bronx, New York native, Scottie Lewis was born on 12th March 2000, under the star sign Pisces. He is an American by nationality who came from an Afro-American ethnic background. Son of Shavasha Nicole Smith and George Lewis Sr., who played basketball in college and overseas. He was raised alongside five brothers and seven sisters. Regarding his physique, Scottie stands 6 ft 5 in (1.96 m) and weighs 189 lb (86 kg).

Scottie Lewis enrolled at the Ranney School in Tinton Falls, New Jersey, where he played high school basketball. Ranked a 5-star recruit in the class of 2019, he committed to the University of Florida on 20th January 2019. 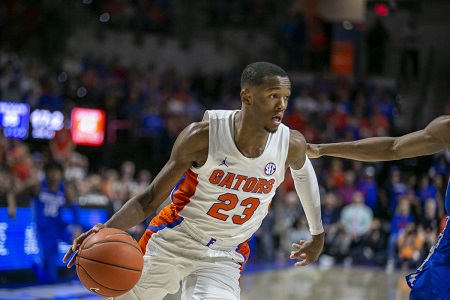 Bleacher Report's NBA Draft Lead Writer, Jonathan Wasserman did not include Lewis in the first round of his March mock draft. However, SB's Sports editor, Ricky O'Donnell projected him the No. 25 overall picks in a February mock draft.

Cade Cunningham, Jalen Suggs, and Evan Mobley are the top prospect in the 2021 NBA Draft.

The love life of Scottie Lewis is completely in the shade. There is no confirmation about him dating neither has posted any pictures with a lady on his Instagram. Seems like the hunk is focused on Draft rather than being in a relationship. For now, he is believed to be single.

Scottie Lewis, who forgo his senior season is now preparing for the 2021 NBA draft. If he got picked in the draft, firstly, the draftee will have a heavy signing bonus and also a million-dollar salary. The average salary of NBA players is $7 million.