4X GLVC Coach of the Year, Scott Davenport is a college basketball coach who stands as the head coach of the Bellarmine Knights men's basketball team, a role he holds since 2005. Before, he served as an assistant for various college teams such as Louisville, VCU, and Ballard HS. His career stats show 375–120 (.758).

Louisville, Kentucky native, Scott Davenport was born in 1957/1958. Also known as "Scotty," he holds an American nationality and is of white ethnic background.

How Much Is Scott Davenport's Net Worth & Salary In 2022?

Bellarmine University men's basketball team and coach Scott Davenport has agreed to a long-term contract extension in 2017 that assures his role at Bellarmine until his retirement. Reportedly, Scott is receiving a salary of  $271,996 per annum. Mike Krzyzewski, John Calipari, and Chris Holtmann are the highest-paid college basketball coach.

As of 2022, Davenport's net worth is $1 million. With an enormous fortune, he is living a lavish lifestyle but has not been flaunted in the media.

Davenport is married to Sharon Davenport, a Cincinnati native. She moved to Louisville at her nine, attended the University of Kentucky, and has two sisters and a brother. The pair started dating in 1979 after they met through Jefferson County Public Schools. They had the same job at two different schools, which was the “positive alternative to suspension” position: Sharon was at Southern while Scott was at Shawnee. 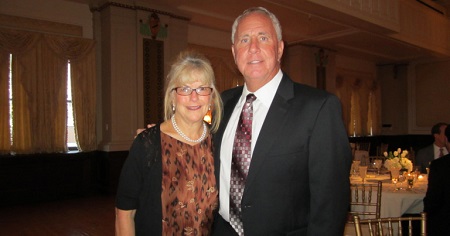 Mrs. and Mr. are blessed with two sons, Russ and Doug, who both graduated from Bellarmine and have an interest in coaching. The elders, Russ lives in Louisville and is married coached lacrosse and elementary school basketball. On the other hand, Doug was an assistant coach at Eastern Kentucky and was hired by Bellarmine as an assistant.

Scott grew up in privation after his father died of a heart attack when he was 9 years old. Since, he was raised by his mother, a hairstylist who had a sixth-grade education. Reportedly, Scott was not blessed with abundant athletic talent, but had an unquenchable love of basketball, playing at nearby Iroquois High School.

Davenport’s mother died several years ago. He mentioned his mother was a major inspiration in his life, “She was the most giving person to everybody.”

In 1984, Davenport started his coaching career at Louisville Cardinals men's basketball as a graduate assistant. After a season, he moved to VCU as an assistant. Further, he had a stint at Ballard HS from 1986 to 1996. In 1996, he returned to Louisville where he would serve until 2005.

In 2005, Scott was hired by the Bellarmine as their new head coach. He has led the team to 6X Great Lakes Valley Conference regular-season titles, 5X conference tournament titles, 12X NCAA Division II Men's Basketball Tournament, and the 2011 national title.