Sasha Attwood is an English fashion model and influencer who often hit the international headline for being romantically linked with England Midfielder Jack Grealish. The pair have had an on and off relationship down the years and there are no posts of the couple together on any of their socials.

Nevertheless, Attwood was seen cheering for the Grealish this Euro Cup. Since she has been more into the spotlight. Did they rekindle?

Sasha Attwood is a twenty-five years old fashion model and influencer who has 52.9 k followers on IG as of July 2021. She is also a YouTuber.

Reportedly, she was scouted by a modeling agency when she was out shopping in Birmingham. She's now represented by Industry Model Management and has done lots of projects Boohoo, among other brands. Her IG is full of photos from her modeling gigs, make-up, and skincare tutorials on there.

Sasha Attwood and Jack Grealish have been in a relationship for a long-time now but on and off. They first met as a teenager while they were students together at St Peter's Roman Catholic Secondary School in Solihull.

The English couple has been through a rocky patch but are firmly back on track now, The footballer is keen to keep Sasha out of the limelight and she keeps him grounded. 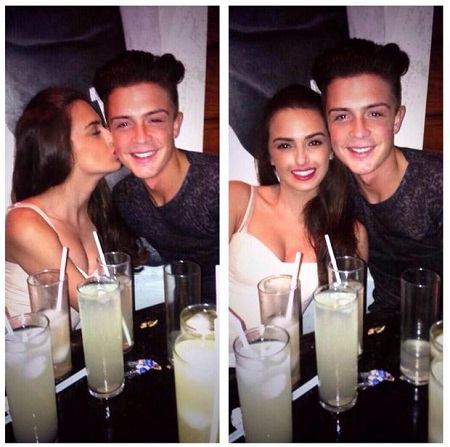 The Aston Villa midfielder said, "Sasha is his secret weapon off the pitch and will support him no matter what. They're both very close to each other." He continued "He thinks it's best if the fans still think he's single, but she's been cheering him on from the sidelines during the Euros."

Though the duo is not seen in each other's socials they are still together and stronger than ever.

During Euro 2020, Sasha Attwood has said she was sent 200 death threats a day and many of them from teenaged girls. She disclosed social media is "toxic" and that it is "really sad" teenagers as young as 13 thought it was acceptable to send abuse online.

It is reported Instagram has launched an investigation following Ms Attwood's remarks and that TikTok had removed comments highlighted by the newspaper.

Sasha and the English footballer had kept their relationship under wraps, but she was spotted supporting him at Wembley during England’s Euro 2020 games.

Sasha is an English model who is currently signed to the Industry Model management, based in Manchester's Northern Quarter and in Leeds City Centre. Her annual income is estimated at £60,000 per annum. As of 2021, her net worth is approximately $0.1 million.