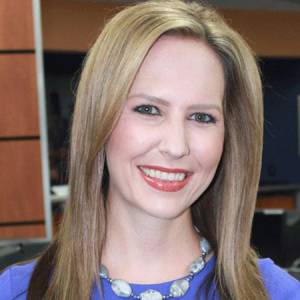 Sarah Jindra is an American journalist, famous for her work as a traffic reporter reporting from the studio, the streets, and the WGN- TV helicopter, Skycam 9 for the WGN-TV Morning News show. In addition, She is also an in-studio traffic news reporter for WGN- TV.

The resident of United States, Sarah Jindra, reportedly earns around $61,600, as her yearly salary from the network, and as of 2018, she reportedly has an estimated net worth of over $200 thousand. As of now, she is happily married to her longtime boyfriend Brent Taylor and has 2 children with him.

Sarah Jindra was born on 23rd February 1982 in Westmont, Illinois, USA. She was born to Kathy and the detail about her father is not available yet.

She holds an American nationality and belongs to the White ethnic group. In addition, she grew up with her younger sister Bethanie and an older brother Justin.

Sarah Jindra Net worth and Salary

The American reporter Sarah Jindra has an estimated net worth of $200 thousand. In addition, Sarah accumulates her net worth working as a traffic reporter. According to sources, a WGN TV offers an average wage of $61 K per annum to its employee.

Further being more specific, a WGN TV traffic reporter has an average salary of $61,600 a year.  Additionally, looking at her popularity she seems to be earning well over the average salary mark from the network.

Sarah reported traffic in Chicago Public Radio (WBEZ) and NBC-5 Chicago before moving to WGN- TV. She was also a general assignment reporter in Champaign for WCIA- TV.

This brought me back to my college days this morning!!! SANDSTORM, BABY!!!! Sorry you had to be a part of our antics, @wgnweatherguy! @wgnmorningnews

Currently, She reports traffic and news for WGN- TV from the studio, on the streets and in the Skycam 9 helicopter of WGN- TV.

Sarah is not only a successful weather reporter, but she is also a married woman. Currently, she is happily married to her husband, Brent Taylor. Further, the duo is blessed with 2 children, a recently born baby girl and a son named Ty Patrick who was born 4 years of their wedding.

Reportedly, the couple dated for around 15 years before eventually getting married on 21 April 2012.

She now lives happily with the man she has known for more than 20 years and two children.