Lauren Brooke Baldwin is a famous American journalist and television news anchor. Prominent for work at CNN, she appeared in CNN Newsroom (2008-2021). She hosted the 3 pm to 4 pm ET edition with Brooke Baldwin.

The resident of the United States, Lauren Brooke Baldwin, reportedly had an annual salary of  $59,679, from the network, and as of 2022, she has an estimated net worth of over $1.5 Million. she is currently married to her longtime boyfriend turned husband, James Fletcher.

Brooke Baldwin Net worth and Salary in 2022

As of Payscale, the CNN reporter receives an annual salary of $59,679 from her successful reporting career with CNN.

Additionally, her Huddle: How Women Unlock Their Collective Power is the best-selling book.

Baldwin, 42, is a married woman. She tied the knot with her longtime boyfriend James Fletcher in 2018. In addition, James is a producer and director by profession. 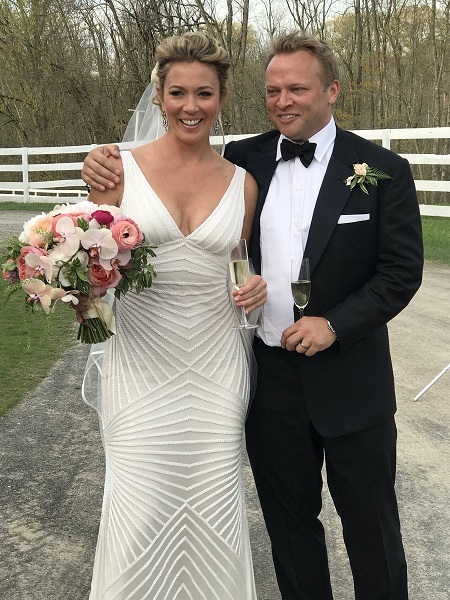 Their wedding ceremony took place in Hudson North, New York City on 6 May 2018. Well, for the first time in 2015, the couple met each other during a holiday party. Since then, the couple began dating. Further, the duo got engaged while they were on a trip to Hawaii.

Lauren Brooke Baldwin was born on July 12, 1979, in Atlanta, Georgia, the U.S. She holds an American nationality and belongs to the White ethnic group. However, she has not revealed information about her family, her parents, and her siblings in the media yet. Further, her star sign is Cancer.

Brooke enrolled at The Westminster Schools, a private college preparatory school. Later, she graduated in journalism and Spanish from the University of North Carolina in Chapel Hill. Additionally, She was also enrolled in an undergraduate program at the Universidad Iberoamericana in Mexico City.

Baldwin started her career at WVIR- TV in Charlottesville, Virginia in 2001 and was later worked as a morning anchor at WOWK- TV in Huntington and Charleston, West Virginia. She later joined the WTTG in Washington, D.C.  as the lead reporter.

In 2008, Baldwin joined CNN. She anchors the CNN Newsroom with Brooke Baldwin on weekdays from 2 pm to 4 pm ET, based in New York.

Brooke also co-anchored the special coverage of CNN, the  Space Shuttle Atlantis( STS-135) from Kennedy SpCenter and has co-hosted the Soundcheck show.

In 2012, her documentary To Catch a Killer won the Silver World Medal Award for Best Investigative Report at the International Television & Film Festivals in New York.

On 16th Feburary 2021, Baldwin disclosed she would be leaving CNN in mid-April. On 16th April, she hosted her final show.