2019 Big Ten Coach of the Year, Ryan Day currently stands as the 24th head football coach at Ohio State University, appointed in 2019, following then Ohio head coach Urban Meyer placed on administrative leave. A former college player, he was a quarterback and linebacker at the New Hampshire Wildcats (1998-2001).

Manchester, New Hampshire native, Ryan Day was born on 12th March 1979, under the star sign Pisces. At nine, he lost his father, which brought a financial crisis to the Day's family. His mother, Lisa, worked several jobs to support the family: Ryan and his brothers, Chris and Tim, who are two and four years younger. With no choice left, he literally stepped into that role as a father figure,

Ryan Day ultimately landed on his dreamed role, head coach in 2019 at Ohio State. He signed five years contract that was projected to pay him $4.5 million per annum. The deal includes several incentives which are excluded from his total pay, such as player academic performance and success on the field. If Day hit all of his incentives, his total pay would increase by $1.225 million. His first season salary ranked him 22nd nationally and seventh in the Big Ten last year.

Ryan Day is married to Christina Spirou (April 1978) from Manchester, New Hampshire. The couple has known each other their entire lives: they met when she was seven and he was six. Like Day, Spirou is also a 1996 graduate of Manchester Central High School. Further, she went on to study communications at the University of New Hampshire, graduating in 2000.

Spirou grew up in a basketball environment. Her father, Stan Spirou, is the former head basketball coach for the men’s team at Southern New Hampshire University, who served for a long time before retiring in 2018. Further, she a Twin Sister Named Kelly Spirou. 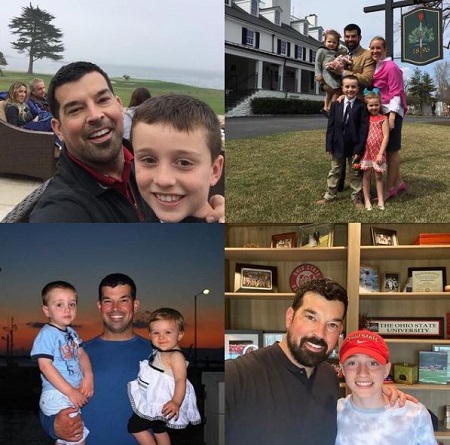 In June of 2005, Day and Spirou exchanged the vows in an intimate ceremony. Now the couple is blessed with three adorable kids: Ryan Jr, Grace, and Ourania.

When arrived in Buckeye State, the couple scored home in the Columbus suburb of Powell, which is located about 12 miles north of Ohio State University in Delaware County.

Ryan Day started his coaching career in 2002 as the New Hampshire tight end coach. He spends the 2003-2004 season at Boston College as a graduate assistant, 2007-2011 as wide receiver coach, 2013-2014 as quarterback coach. Between this time, he had a stint at Florida and Temple.

In 2015, he joined Philadelphia Eagles as quarterback coach. The following season, he held the same position at San Francisco 49ers.

In 2017, Day was hired by the Ohio State co-offensive coordinator and quarterback. On 1st August 2018, he was named acting head coach at Ohio State. After then head coach, Meyer was placed on leave, Day won all three games which led Ohio to placed him as a full-time head coach. Under his belt, he led the team to 2X Bing Ten (2019-2020) and 2X Big Ten East Division (2019-2020).