Leader of the Riot Squad, Dori Elizabeth Prange is an American professional wrestler popularly known as Ruby Riot in the ring. She is currently in a contract with WWE and performs on the Raw brand. Besides WWE, she has also performed in several other promotions like  Shimmer Women Athletes, Shine Wrestling, Ohio Valley Wrestling (OVW).

Ruby is currently receiving a salary of above $80,000 and she is supposed to have a satisfactory net worth of around $1 million as of 2019. She is currently dating her fellow wrestler Jake.

How much is Ruby Riot Salary and Net Worth in 2019?

Ruby Riot is among the popular names in the wrestling field and she is currently receiving a salary of around $80,000 annually from the WWE. As per the sources, her salary remains just $60,696 after paying the annual tax. In addition to this, the exact figure of the net worth of Ruby is disclosed but it is estimated that she might have a net worth of around $1 million.

Is Ruby Riot Single or has a Boyfriend? Know Her Personal Life

Ruby Riot is currently in a romantic relationship with her good-looking boyfriend Jake Something for a long time but they haven't reported any information suggesting they are married/engaged or not. 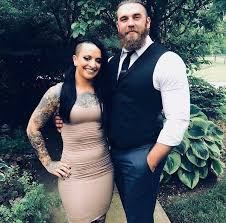 Ruby is a famous wrestler with a huge number of fan following but she is not so good at sharing information about her personal life. She is found to be less sharing about her love affair and other facts regarding personal life. Her relationship came to light after she posted a photo with her boyfriend Jake on her Instagram account.

As going on exploring her official social accounts, she has shared a lot of posts about her tattoos. Riot's boyfriend is also a professional wrestler who has been in wrestling career since 2014. They haven't reported any disputes in the relationship so let's hope to hear about their wedding soon.

Ruby Riot was born on January 9, 1991, in Edwardsburg, Michigan, United States. She holds an American nationality and belongs to the white ethnic group.

Ruby Riot has been in a wrestling career since 2010 when she defeated C.J.Lane in her debut game for Juggalo Championship Wrestling. In addition to this, she also performed against Taeler Hendrix in Ohio Valley Wrestling (OVW).

Similarly, Ruby also performed in World Wonder Ring Stardom where she teamed with Act Yasukawa against Kris Wolf and Hudson Envy. She made her WWE debut in 2016 after she signed with WWE and lost her first game with Sonya Deville.

During her 2017 season, she along with her squad Liv Morgan and Sarah Logan attacked Becky Linch and Naomi. Since 2016, she has been with the WWE. Besides, she also performed in a videogame as a downloadable character in WWE2K18.