Daria Rae Berenato is a mixed martial artist and professional American wrestler under the ring name Sonya Deville. Further, she is signed to WWE and is performing on the brand Smackdown. She made her debut in WWE on December 3, 2015.

Sonya Deville is the first woman to open up about her sexual orientation in wrestling saying that she is gay. Moreover, she is an open relationship with her girlfriend, Zahra Schreiber.

Sonya Deville Net worth in 2019; How much is her Salary and Career Earnings?

There is no doubt that the wrestler has collected millions of net worth from her career in WWE to date. Sonya launched her merchant as well. She co-hosted AfterBuzz's YouTube show. Being a fitness freak, from endorsements and advertisements, she grabs immense promotions and wealth.

Wrestlers receive basic annual wages with the professional contract plus travel allowances and bonuses. Further, Sonya Deville has an annual salary of $100,000. According to the sources, Sonya's net worth is predicted be about $1million till 2018 but her net worth is still under review of 2019.

Exploring her social accounts, she follows a lavish lifestyle. Being a celebrity, she hasn't revealed about her house and cars but definitely posted about her holidays which seems to be luxurious. Recently, she went to St. Lucia for her vacation which is a luxurious destination.

Is Sonya Deville A Lesbian? Know About Her Sexual Orientation.

Sonya Deville is openly gay. Even with the advent of female wrestling, the issue of the fighters ' sexual orientation was never really discussed until Sonya Deville emerged as the wrestling world's first openly gay woman. Also, in an appearance on WWE Tough Enough, the company's talent search show, the judges asked her if she was in a relationship, and Deville answered, "I have no wife yet, but I have a girlfriend."

There have been rumors she was dating fellow wrestler, Mandy Rose living in the same apartment as the wrestling pair, and apparently being the best friends. Also, There are many pictures of them hanging out together on social media, but there is no concrete evidence that Mandy has any sexual interest in women on her part.

However, Sonya dated the WBFF Bikini Diva Pro, Christina Heath. They started to see each other in 2015, but later in the year, they broke up. Also, she's with Zahra Schreiber at the moment. The pair started to hang out together in 2016. In 2018, they revealed their relationship publicly. 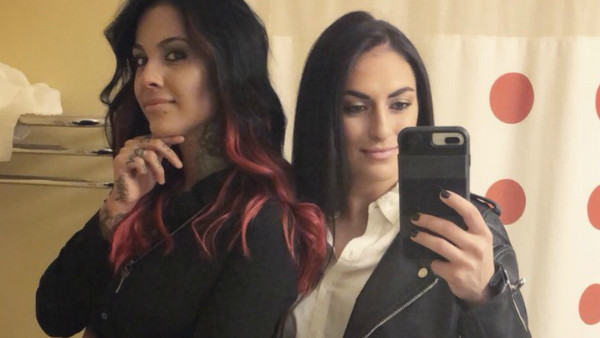 Despite all those rumors and controversies, their relationship is going all good and smooth. Also, they spend quality time with each other and their respective family too. Family of both support and cheer for them a lot. On social media, Sonya shared some selfies with her girlfriend. During SmackDown Live in May, her girlfriend, Zahra posted a tweet confirming their relationship.

According to the sources, Zahra is a model and also a professional wrestler.  Also, both of them are a tattoo lover and has a lot of tattoos all over the body.

It should come as no surprise to a lady who has been involved in active physical fighting since she was 16, that her physique is quite toughened. Also, her height is  5' 7" and weight is around 130 pounds.

Sonya Deville was born in Shamong Township, New Jersey on September 24, 1993. Further, her parents are from ancestry in Italy. Also, her name at birth was Daria Berenato. In addition, she holds the nationality of America and has the racial background of mixed. Sonya's zodiac sign is Libra. She has two siblings.

In Tabernacle, New Jersey, Sonya attended Seneca High School. At the age of 16, Deville began training and competing in mixed martial arts. Also, Sonya's first MMA match took place in March 2015, making her debut in a match where she faced a unanimous decision against Jasmine Pouncy at MMA University losing.

Sonya's WWE journey started when she was one of the thirteen WWE Tough Enough finalists in June 2015 in the sixth season. On a personal level, the competition did not go exactly as she expected, she was the third to be ousted, a self-confessed sore loser. Nevertheless, her performances left an impression and in October 2015 she was awarded a contract with the WWE, aligning her with their development brand, NXT.

Sonya made her RAW debut with Mandy Rose and Paige on November 20, 2017. They lay waste on that episode to the women's division and were revealed as the team known as Absolution by the next week. Also, her first televised match was in Tribute to the Troops on December 19, when Bayley, Mickie James, and Sasha Banks were defeated by the Absolution. She took part in the Royal Rumble and entered Number 10. In the first women's Elimination Chamber match, Sonya was also a competitor.

Sonya became SmackDown general manager when Paige was forced to retire in April 2018 due to medical problems related to her neck injuries and surgery. Rose and Deville have been drafted from Raw to SmackDown in the 2018 Superstar Shake-up.

The favorite signature combat movements of Sonya Deville include the Anklelock, Double leg takedown, Kimura lock, Body scissors, Kneebar, and the Spinebuster. She is also known to use the Enzuigiri Step-up and Armbar Triangle.