Romell Samir Quioto Robinson simply known as Romell Quioto is a Honduran footballer who is currently signed to Montreal Impact in Major League Soccer and the Honduras national team. The jersey No. 30 winger previously played for the teams such as Vida (2010-2013), Wisla Krakow (2012), Olimpia (2014-2016), and Houston Dynamo (2017-2019).

Balfate, Honduras native, Romell Quioto was born on 9th August 1991, under the star sign Leo. He is Honduran by nationality who came from the African ethnic background.

A professional since 2010, Romell Quioto has earned a good deal of money through his career. Presently, playing for the MLS side, Montreal Impact, he makes a base salary of $506,668 which is $556,501 with a compensation per annum. Zlatan Ibrahimovic and Giovani dos Santos are the highest-paid footballers of the league. 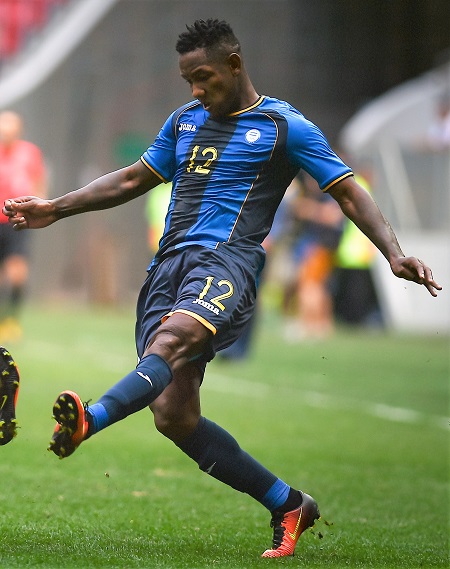 Romell Quioto during a match in 2016 SOURCE: Wikipedia

Besides, he makes a decent sum of money through his national side, Honduras national team, where he has been capped 47 times along with 8 goals. Also, endorsement deals are another vital source of income.

To date, there are no records of Quioto's serious relationships or girlfriend. Nevertheless, the hunk once caught in the controversy which cost him a loss of reputation as well as money. Reports from 2018 show, a lawsuit was filed against Houston Dynamo forward Quinto that alleges the dissemination of intimate photographs and videos back in 2017.

As reported, Quioto took and received nude pictures of a woman whom he became friends in 2017 before their relationship became more intimate in 2018. Moreover, he is accused of filming videos of her topless without her consent. Her attorney claims that Quioto released the pictures and video onto socials such as Twitter, Facebook, Instagram, and a adult site. The complainant seeks financial damages in excess of $1,000,000.

Romell Quioto is currently twenty-eight years old. He stands 1.8 m tall and weighs 74 kg. Moreover, the footballer has maintained his body healthy and attractive as well. His hair and eyes color are black.

Quioto who came up through the Union Ajax youth system made his professional debut with the team for Vida in the Liga Nacional during the 2010 Clausura season. During the 2012-13 season, he was loaned out to Polish Ekstraklasa side Wisla Krakow. Overall, he had 77 competitive matches with 20 goals in the Vida.

On 23rd December 2016, it was announced that Quioto joined the MLS side, Houston Dynamo. On 4th March 2017, he made his Dynamo debut with a goal in a 3-1 win against the Seattle Sounders. During his tenure with Huston, he appeared in 72 games and scored 15 goals. As of now, he plays for the Montreal Impact, which he signed on 20th November 2019.