Roman Dolidze is a well-established Georgian professional mixed martial artist. He has been fighting in the Ultimate Fighting Championship under the Light heavyweight category. Dolidze was the former World Warriors Fight Championship (WWFC) champion. Roman fights under AKA and Xtreme Couture MMA teams.

Roman Dolidze was born on July 15, 1988, in Batumi, Georgia. He is the son of Nodar Dolidze and Marina Chemia. His father, Nodar, was an Engineer, and his mother, Marina, was a physician. Dolidze played soccer for eight years; the last three years he spent as a professional goalkeeper. Talking about his physical appearance, Roman stands six feet and two inches tall and weighs 93 kg.

Roman started training Brazilian jiu-jitsu at the age of twenty after moving to Ukraine. He became the World Grappling Champion and the European Grappling Champion under United World Wrestling rules. Dolidze made his professional debut at RFP 53: West Fight 23  in December 2016 against Alexander Kovbel. He won the match via submission.

In 2019, Dolidze signed with the UFC and was about to make his UFC debut but was suspended for one year due to this violation. In 2020, Roman made his UFC debut against Khalis Ibragimov and won the match via TKO. In December 2020, The fight won his second match in the UFC vs. John Allan. In March 2021, Dolidze made his Middleweight debut against Trevin Giles at UFC on ESPN and lost his first professional match via unanimous decision. He is set to face Laureano Staropoli in the UFC Fight Night 189.

Father of A Daughter

Roman is a proud father of a daughter. He is an active social media user. The fighter keeps sharing photos of his games and training regularly. However, he has not shared a word about his wife and his relationship in public. Following his social media, It seems like Roman is married to Georgia Sokhumi. They have a daughter who is about three years old.

How Rich is Roman Dolidze? Know About His earnings, Salary, Contract, and Sponsors

Roman Dolidze has an estimated net worth of more than $100,00. He has accumulated most of his net worth through his successful career in UFC and MMA. In December 2020, Roman took home $23,000 from a single match against John Allan. Dividing his earnings, He earned $10,000 as guaranteed Payouts, $10,000 as winning bonus, and the remaining $3,500. 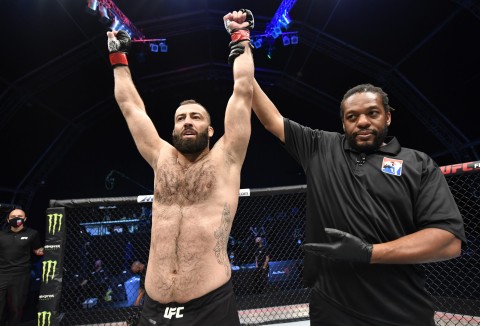