A police officer turned UFC fighter, Laureano Staropoli is a professional MMA since 2013 and has compiled a record of 9-3-0 (win-loss-draw). Fighting out of La Plata, Argentina, he previously competed at Combate Costas MMA, Ultimatum MMA, Punishers, La Plata Fight Club, and Tavares Combat 7.

How Much Is Laureano Staropoli Net Worth In 2020?

There are many ways a professional MMA fighter can make money. Generally, they get paid a base salary on fight night no matter if they win or lose. Further, there is a win bonus, fight night bonuses, and sponsorship.

Currently, the major source of income for Staropoli has been UFC.

Besides, he has competed at the various fighting organization before UFC, earning a decent sum of money. As of 2020, his net worth is approximately $0.2 million.

Laureano Staropoli's Girlfriend: Is He Dating?

Nicknamed El Matador, Staropoli is a quite confidential person when it comes to his private life. The middleweight/welterweight fighter always preferred his love life behind the camera. He might be dating his girlfriend and shared some pictures with a lady in his highlight section of IG, but there is a confirmation regarding his relationship status.

Scrolling through his IG account, he often shares adorable pictures with his two dogs: pug and

Laureano Staropoli became pro in 2013 and fought widely in South America. He amassed a record of 7-1 prior to joining UFC. on November 17, 2018, at UFC Fight Night: Magny vs. Ponzinibbio, Staropoli made his UFC debut against Hector Aldana. He won the bout via unanimous decision. In his second fight, he won against Thiago Alves at UFC 237 on May 11, 2019. 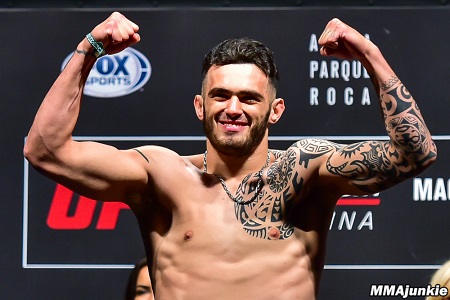 On 26th October 2019, he faced Muslim Salikhov at UFC on ESPN+ 20 where he loses the bout via unanimous decision. On 8th August 2020, he fought against Tom Mean at UFC Fight Night 174 where he weighed in at 174.5 pounds, three and a half pounds over the welterweight non-title fight limit at the weigh-ins, hence, he was fined 20% of his purse. He lost the fight.