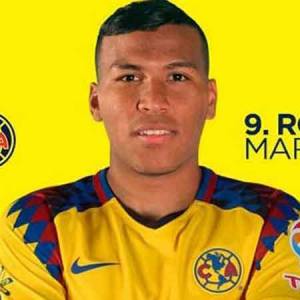 Roger Martinez is a Colombian professional football player who currently plays for the Mexican Liga MX side Club America. Before joining Club America, he has played for teams like Racing, Ramon Santamarina and Villarreal.

Martinez has been playing football since a young age and has played for the youth team of Juventus and Expreso Rojo.

Net Worth of Roger Martinez

Roger Martinez's net worth is over $2 million. Currently, he is signed to the Liga MX where his weekly wage is reported €42,000 which is €2.1 million per annum.

His transfer value is rumored to be around $5.84 million.

Roger Martinez's love life is a mystery as Martinez has never opened up about his relationships. On his Instagram account, he has posted a picture of a child and what looks to be his partner on December 25 of last year.

The picture suggests that he is already in a relationship and has a child of his own, but there is not any other information aside from it. It is not known whether the girl is his wife or girlfriend.

Roger Martinez was born as Roger Beyker Martinez Tobinson was born on June 23, 1994, in Cartagena, Colombia. His parents are Marinella Tobinson and Roger Martinez Mercado. He started playing with the youth team of Juventus and Expreso Rojo.

At the age of 17, he was offered to play for Boca Juniors and Argentinos Juniors. He went to Argentina to play with the teams but since his parents weren't there with him, he was unable to play in official matches.

Martinez was loaned to the second division Ramon Santamarina in 2014. He only appeared in 9 matches of the season, starting in only two of the matches. After finishing the duration of the loan with the team, he returned to Racing and was loaned to CA Aldosivi which was recently promoted to the First Division for the 2015 season. He made his first appearance with the team on the season opener. He played in 26 games of the season and had scored 6 goals.

For the 2016 season, Roger Martinez stayed at Racing Club but was only allowed in 10 games. In the 10 appearances that he made for the team, Martinez was able to score 6 goals in total. Martinez was transferred to the Chinese League's team Jiangsu Suning on July 12, 2016. He made his first appearance with Suning on July 20 playing against Hebei CFFC. He helped the team to reach the finals of the Chinese Cup where they lost to Guangzhou Evergrande.

Roger Matinez was loaned to the Spanish Club Villarreal on January 7, 2018, with an option to buy. Martinez only played in eight games for Villarreal and scored one goal. After the end of his loan, Villarreal exercised the option to sign him and immediately sold him to First Division Mexican team Club America on June of 2018.