Born in Costa Rica but raised in the US, unlike other Costa Rica born player he played mostly for the US club like DC United, Phoenix Rising FC etc as well as for Portuguese football club, FC Arouca and Brazilian football club, Sports Recife.

He has joined the Costa Rican squad since 2011 and played in tournaments like CONCACAF Gold Cup and Copa Centroamericana.

Rodney Wallace was born to father, Sydney Wallace, and mother, Sandra Burns Wallace on 17 June 1988 in San Jose, Costa Rica. His family migrated to the USA when he was only nine and was raised in Rockville, Maryland.

He got his high school education from The Bullis School and played for Maryland Terrapins for the University of Maryland during 2007/08.

Costa Rica born Rodney Wallace’s net worth is not precisely known, but according to data of 2018, he earns an annual salary of above $ 380000 from his current club, New York City FC. His weekly earnings are in the region of $ 7400.

Rodney Wallace’s net worth could be estimated at around $ 1 million. The midfielder's current market value is in range of $1.2 million.

Wallace made his professional career debut with US soccer club, D.C. United in 2009 where he was the 6the player to be picked in first round of MLS 2009 SuperDraft.

He made his debut with the team against LA Galaxy on 22 March 2009 and scored his first goal for the American club against New York Red Bulls on 26 April 2009.

After being a regular player for the team he was drafted to Portland Timbers in 2010. During his time with Portland Timbers, he was the part of the team that won MLS Cup and Western Conference( Playoff and regular season) in 2015.

He later resigned with the club and was transfer on loan to Arizona United in the summer of 2014.

During 2014, he won the prestigious MLS Comeback Player of the Year award. The award includes the likes of David Beckham and American former soccer star, Clint Dempsey.

After his success at Portland Timbers, he signed and joined Portuguese Liga Club, FC Arouca in 2016.

There was a rumor that Wallace had no intention of returning back to Brazil in 2017. He was not present on the first day of the preseason on January 9, 2017, the Brazilian club gave a deadline till Jan 13 to explain his reason for non-attendance.

Finally, both Wallace and Sports Recife reached a resolution and he repaid the club fees transfer amount on February 1, 2017, and released from the club the following day on February 2.

After returning to the US, the midfielder signed with MLS Club, NewYork City FC on February 15, 2017, and scored his first goal for the Amercian side against his former club, DC United on 12 March 2017.

Rodney Wallace, a US Greencard holder, made his international debut and scored his first international goal for Costa Rica against the United States in a friendly match on 2 September 2011.

He is listed of probable players along with Oscar Duarte and Johan Venegas to be included in Costa Rica National Squad for 2018 FIFA World Cup.

Rodney Wallace, a popular soccer player in US Soccer league, is currently married. He is enjoying his stay and time in the US and a luxurious lifestyle with his wife Haley Bauer.

The couple first met and had their wedding ceremony held in Rose City on January 10, 2015. 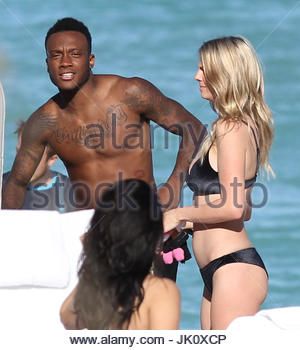 Wallace and Haley already had a daughter born before their marriage in December 2014.