Robert Sarver is a well-known American businessman. He is best known as the co-founder of Southwest Value Partners, a real estate development company. Robert is also the owner of several sports clubs like Phoenix Suns, Phoenix Mercury and RCD Mallorca.

Robert Sarver was born on October 31, 1961, in Tucson, Arizona. He is the son of Jack Sarver and his wife, Irena Sarver. His father was a businessman, Banker and hotel developer. After graduating from High School, Sarver enrolled at the University of Arizona.

Robert Sarver has an estimated net worth of more than $400 Million. He has earned most of his net worth through his successful investment and stakes in the Phoenix Suns. As per sources, The Suns are valued at $1.8 Billion in 2021, and Robert is the majority shareholder of the franchise. Sarver owns soccer club Real Club Deportivo Mallorca, S.A.D. of Spain's La Liga. In April 2004, Robert purchased the Suns from Jerry Colangelo for $401 million. This purchase was an NBA record for all time. Under his ownership, Phoenix Mercury has won titles in 2007, 2009 and 2014.

Robert is a married man living a happy married life along with his wife and children. Robert walked down his wedding aisle along with Penny Sanders on November 2, 1996, in a private wedding ceremony. They had invited only a few members from both the families and some close friends. As per sources, Sarver and Penny met each other in 1991 and had been dating each other. 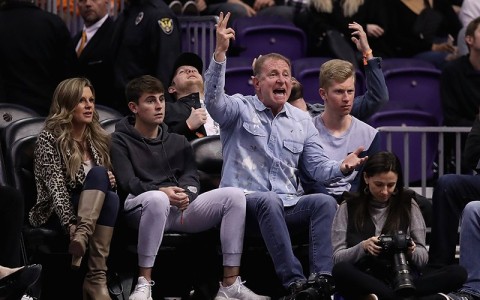 Robert attends an NBA game along with his family SOURCE: Arizona PBS

Robert and Penny are the proud father of three children, Max, Jake and Zach. The family of five is currently living in Paradise Valley, Arizona. It's been more than two decades since their marriage, and there have been no rumors of the couple having ups and downs in their married life.

Robert became a certified public accountant in 1983 and founded the National Bank of Tucson. He later changed the name to the National Bank of Arizona. In 1994, Sarver sold the bank to Zions Bancorporation and acquired Grossmont Bank. In 2003, he became chairman of Western Alliance Bancorporation. In the mid-way, The businessman co-founded the real estate company Southwest Value Partners with Millard Seldin.

In 2004, Robert successfully purchased the Suns for a then-record $401 million. He also purchased the WNBA team along with The Suns. Under his ownership,  Mercury has won three WNBA championships (2007, 2009 & 2014) and four conference titles. In 2015, The businessman offered £20 million to control the Scottish football side Rangers Football Club. However, the club board rejected the offer. Later, He had a second offer which also got rejected.

In early 2016, Sarver bought the Laliga football team, RCD Mallorca, in the second division for €20 million.

In 2021, Sarver was accused of numerous allegations overs Making Sexual Jokes at Memorial Roast. Many big news portals have published their issues on the topic and have reused the allegations.