Rich Waltz is a popular play-by-play commentator who worked for Fox Sports Florida and Miami Marlins. Rich Waltz is now 56 years old and is still active in the world of Television Sports commentary.

He has also commented on football and gained experience with big events like NFL Europe for Fox, Pac-12 Football for FSN, and NFL preseason games for the Seattle Seahawks. Rich Waltz is a married man and has two children from his successful married life. The family lives together in Issaquah, Washington. As of 2018, Rich Waltz has a yearly income of around $1.5 million.

Rich Waltz was born on October 22, 1962, in Martinez, California, United States. He is American by birth and his zodiac sign is Libra. The name of his father and mother has not been documented anywhere but the name of his brother ‘John’ was made known during an interview.

He revealed that his passion for baseball is from a very young age, and remembered how his father would let him and his brother play baseball when they were kids. He thinks his father to be the inspiration for his love of the game of baseball.

He also played baseball in college, once at Pittsburg, California for Los Medanos College and at the University of California, Davis.

Waltz started his work as a commentator on MLB Network’s Thursday Night Baseball in 2011 and also for Fox’s Saturday Baseball from 2012 to 2015.  He further is known for play-by-play commentary on three World Baseball Classics for MLB Network and two rounds of the WBC in Japan by partnering with Buck Martinez.

Waltz, in his career, has worked for different companies that broadcast Major League Baseballs such as FSN Florida, Fox, ESPN, ESPN Radio, FOX and CBC Television. 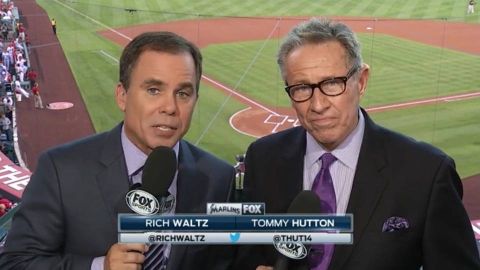 In his career, Rich has announced and commented on some historic baseball events such as no-hitters of Anibal Sanchez’s in September 2006, Roy Halladay’s Perfect game on May 29, 2010, Carlos Delgado’s four home run and Henderson Alvarez’s no-hitter against the Detroit Tigers on the final game of the 2013 Major League Baseball season.

Thanks to @tbahama for the sweet shirt on @cbssports

Now, Paul Severino will be replacing Rich Waltz in the Marlins as his contract with Fox Sports Florida ended and hasn’t been renewed. So, in the year 2019, he will be working for MLB Network and College Football and Basketball for CBS Sports Network, FS1, Fox Sports, CBS Sports, and Turner Sports.

Rich Waltz yearly salary rounds around $75k from MLB Network only. He is engaged in various Television channels, so we can conclude that his yearly salary in more than $1.5 million in total.

Since he earns something around $1.5 million from all the Television channels he works for, we can say that Rich Waltz's net worth should be somewhere over $5 million as of 2018.

He currently lives at Coral Springs, Florida, The United States.  Further, he is married and has two children (daughter) from his married life.

He has been awarded the prestigious Emmy awards for three times and was honored by the Marlins with the Community Service Award in 2008 because his FSN Fantasy Auction raised more than $1.2 million within 12 years for the Marlins Community.