Harry Leroy Halladay III, commonly known as Roy Halladay was an American professional baseball player who used to pitch in Major Leauge Baseball (MLB) for the Toronto Blue Jays and Philadelphia Phillies between 1998 and 2013.  Roy Halladay passed away at the age of 40 following a tragic plane crash in Florida.

Born in Denver, Colorado on14 May 1977. His father Roy II was a pilot for a food-processing company and his mother Linda was a homemaker.

Since early age Halladay loved baseball and he used to watch games on television and later would try every position on the field. After he turned 13, his success on the pitcher's mound started attracting scouts of the major league and Halladay soon began to train with Colorado baseball guru Bus Campbell.

After he graduated from Arvada West High School in 1995, Halladay was picked up by Toronto Blue Jays in the amateur draft. Soon he started to set his standards up and was called up in 1998 as he was promoted to major-league club.

Halladay's Net Worth and Properties

Roy Halladay was a former American Major League Baseball player who was paid $148 million in salary alone before taxes during his career and he also earned millions more from endorsements. Halladay had a net worth of $70 million at the time of his death in 2017.

His annual salary was reported to be $20 million with the 3 years $60 million worth contract signed in 2009. His earnings from the endorsement deals that year was $500 thousand.

Halladay owned a condo in Pennsylvania worth about $6.9 million. Besides, he also had a house in Odessa, Florida. He also used to own a 1932 Ford Hotrod.

The Career of Ray Halladay

The 1998-2001 season saw Halladay start his career against Detroit Tigers and his home run would allow in a 2-1 Blue Jays victory, as he recorded his first major league win.

In 2001 as the club was demoted to minor leagues, Halladay improved himself and in 2002, he had a breakout season, finishing with a 19-7 record, posting a 2.93 ERA with 168 strikeouts in 239.1 innings and was named American League All-Star team.

Halladay pitched the first extra-inning shutout in the major leagues since Jack Morris in Game 7 of the 1991 World Series, leading the Blue Jays to victory over the Tigers on September 6.

Halladay continued his success in 2003 season with 22-7 record, he also recorded 294 strikeouts. The season saw Blue Jays with 86 victories but could not perform in the following season due to a shoulder injury.

The 2005 season Halladay, posted a 12–4 record with a 2.41 ERA in 19 starts and selected to his third All-Star team but unfortunately his broken in a line drive on July 8 which kept him out for the remaining season.

On March 16, 2006, Halladay signed a 3-year contract extension and finished the year near the top of MLB with 16 wins. Although Halladay's strikeout total was lower in 2006 than in previous seasons, his ground ball, fly ball ratio, complete games, and innings pitched were all among the American League leaders.

Roy retired from the game after the 2013 season having given 16 years of his life for the love he had for the game. He is regarded as one of the greats in the game like Clayton Kershaw,  Barry Bonds, and Albert Pujols.

Halladay was married to Brandy Gates and together with their two children Braden and Ryan Halladay used to live in Tarpon Springs, Florida. The couple was wedded to each other in 27 November 1998. 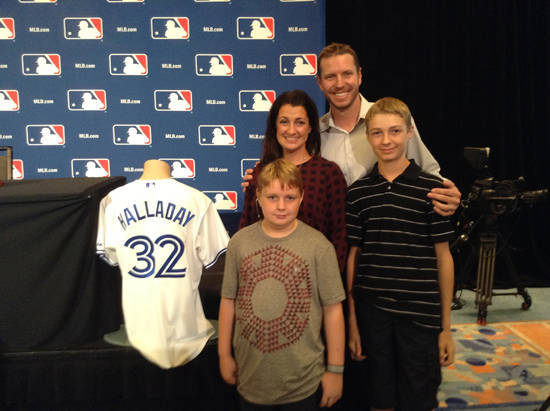 Ray was a very sensitive individual and was involved with many charities and donation for the poor and needy. While he was a part of Blue Jays, he used to donate $1000,000 each year to the Jays Care Foundation.

At the age of 40, while flying his ICON A5 Founders Edition amphibious aircraft on November 7, 2017, Halladay crashed into the Gulf of Mexico. The air traffic controllers confirmed that they did not receive any mayday distress signals before the crash and he was reported dead after the Pasco Sherrif's Office confirmed the crash off the coast of New Port Richey, Florida.

In his lifetime, Ray Halladay was praised and loved by many including his fans and friends. Halladay received many honors and awards for his dedication to the game and his generosity in and out of the pitch