Quinn Hughes is a professional ice hockey player from America who currently plays in the NHL(National Hockey League). He wears the Number 43 Jersey and plays in the defenseman position for the Vancouver Canucks. In 2020, Quinn was named in the NHL All-Star Game and NHL All0-Rookie Team. Also in February of the same year, he was awarded NHL Rookie of the Month.

Vancouver Canucks defenseman was one of the top prospect players before getting drafted in the first round and seventh overall by the Canucks in the 2018 NHL Entry Draft. He played for the University of Michigan During his college time in 2018, he was included in the All-Big Ten Freshman Team and also the All-Big Ten Second Team. There in his rookie season, he recorded the highest assists by a freshman defenseman which is 24 in the history of Michigan.

Who is Quinn Hughes? His family of Ice Hockey

Quintin "Quinn" Hughes was born on October 14, 1999, in Orlando, Florida, United States, under the birth sign Libra. Quinn Hughes comes from a Jewish family. He was born to his father Jim Hughes and his mother is Ellen  Weinberg-Hughes who is also a former hockey player. She represented the United States in the 1992 Women's World Championships. 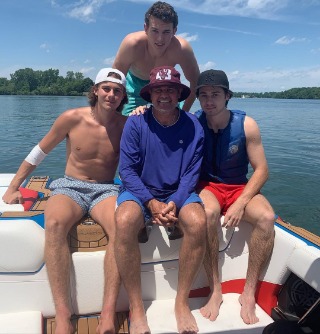 Quinn Hughes with his father and brother SOURCE: [email protected]_quinnhughes

He was raised in Boston along with his 2 brothers Jack and Luke. His both brothers were drafted by the New Jersey Devils in different years. New Jersey drafted Luke in the fourth overall in the 2021 NHL Entry Draft while Jack Hughes was drafted in the number one by the Devils in the 2019 NHL Entry Draft.

What is Quinn Hughes's Net worth? His salary and contract with Canucks

Quinn Hughes has an estimated net worth of $10 million. It includes all his properties, assets, houses, and cars. He earns a good salary with the Canucks in NHL. 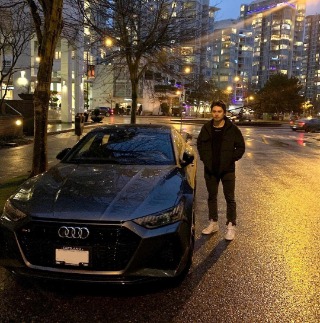 Quinn Hughes in front of his Mercedes SOURCE: [email protected]_quinnhughes

But recently in 2021, he extended a major contract with Vancouver worth $47 million over the time of 6 years. He will earn a cap hit of $7.8 million per year with them until the end of the 2026-27 season.

Looking at the salary, he must be living a lavish lifestyle.

There is not much information about the relationship of Quinn Hughes as he likes keeping it private. Rather, the Jack Hughes brother loves spending time with his family. Till now, he has not shared a word about his girlfriend. Read about:- Who is Caleb dating?

But the Canucks defenseman is an active social media user, and frequently shares photos of him, his games and his family on his Insta So, following his timelines, it seems like he is single as of 2021.