Phil Taylor is a well-known English former professional darts player. He was inducted into the PDC Hall of Fame in 2011. Phil played at the professional level from 1987 until 2018. Taylor won the PDC Player of the Year award six times from 2006 until 2012.

Phil Taylor was born Philip Douglas Taylor on August 12, 1960, in Burslem, Stoke-on-Trent. He is among the three children, born to Doug Taylor and his wife, Liz Taylor. Phil has a brother named Christopher and a sister named Liz. At the age of sixteen, Taylor dropped from high Schoola and started working as ceramic toilet roll handles and sheet metal worker. Talking about his physical appearance, Phil stands five feet and seven inches tall and weighs 80 kg.

Phil Taylor's Net Worth in Millions

Phil Taylor has an estimated net worth of more than $5 Million. He has earned most of his net worth through his three-decade career in darting. A dart player does not need to win an event to earn their prize money; rather, they are paid based on the round they reach of the events. In his last season of 2018, Phil played in just the PDC World Championship and took home prize money of £170,000. The previous year, He appeared in almost a dozen games and had earned a similar amount of £170,000. 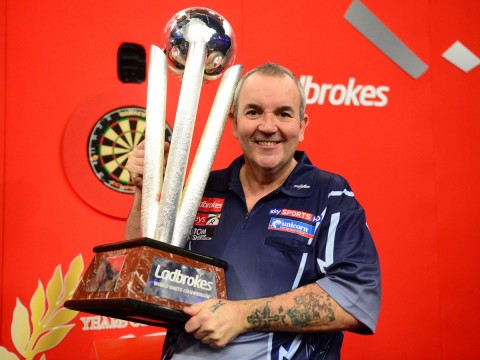 Phil is very much concerned about his love life and private about it. Lately, There has been no information about his relationship status. The dart player could be single, dating or even engaged. He was previously married to his former wife, Yvonne Taylor, for almost thirty years. The love birds walked down their wedding aisle in early 1980. Phil along with his former wife and their daughter SOURCE: The Mirror

Phil and Yvonne had four children together, Lisa, Chis, Kelly and Natalie. This happy relationship ended in 2010 when Yvonne started living separately and filed for divorce. The divorce was settled in 2016. In 2011, He was rumored to be dating his fitness instructor, Laura Church. None of them have shared a word about this relationship status.

Phil started his professional career in 1987 and earned his first title at Canadian Open in 1988. In 1990, He earned his first World Championship title. Taylor dominated darts for over two decades and won 214 professional tournaments. After the World Darts Federation formation, The player dominated the world events from the mid-1990s until the mid-2000s.

Phil won did not lose a single match for nine years. Taylor retired from dart in 2018, winning a record 85 major titles and a record 16 World Championships. He held the world's number one ranking for thirteen years in total.