Jonny Clayton is a professional dart player from Wales and currently competes in Professional Darts Corporation(PDC) as well as BDO World Dart Championships. Though he has never won World Championship, recently in 2022, he reached Round of 16. He is also a winner of Premier League, Masters, World Series FInal and World Grand Prix. He is a right-handed dart player.

The Welsh PDC player had one of his best seasons in 2021. He won the World Grand Prix in 2021 and Premiere League also in the same year. He also reached the quarter-final in the Grand Slam of Darts. He also won Masters, a non-ranking PDC Dart competition World Series Final in 2021. As of 2022, he is ranked as the  Number 8 in the PDC Rankings.

Jonny Clayton was born on 4 October 1974, in Llanelli, Wales. According to the astrologers, his zodiac sign is Libra. He currently resides in his birth town Jericho. Information regarding his father and mother's name is still not revealed. But he told that his father was also a dart player and an inspiration for him to play dart. As a kid, he used to sneak into his father's dartboard and practice without his knowledge.

Read also:- Who is Gerwyn? His bio and Family

How tall is Clayton?

He has short and black hair and a small black beard. His eyes are black and look average in person.

The 2021 World Grand Prix winner holds Welsh nationality and is of a White ethnic background.

Net Worth and Career Earnings of J Clayton

According to various sources, Jonny Clayton has an estimated net worth of $500,000. He earned most of his income from playing dart and the prizes that come along with it. 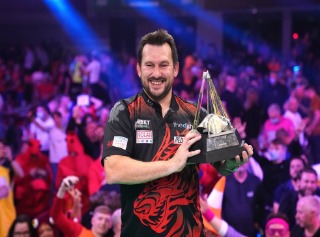 Winning the dart competition can lad a large amount of prize money for an individual.  According to the express, he can earn 500,000 pounds if he is able to win the World Championship competitions which do not seem far from the Number 8 dart player in the world.

He lives a moderate lifestyle with his family in his hometown.

Who is Clayton married to? (Wife and Children)

Clayton Jonny is currently married to his wife Elen Clayton. The couple has been together for more than 12 years as of 2022.

Jon Clayton is not an open person who rarely shares his love life with the public. But he has shared a few photos of his family on his Instagram.

It is not sure when they started dating and even when they got married. But it is predicted that the couple met during their 30s and got married. 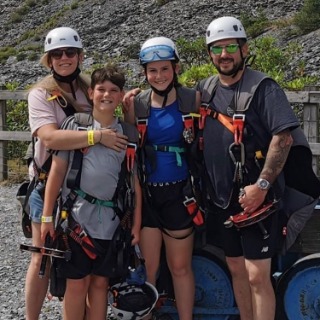 Jonny and his wife Elen are proud parents of their children a son and a daughter.

The family spends their tie together in their own hometown in Wales.