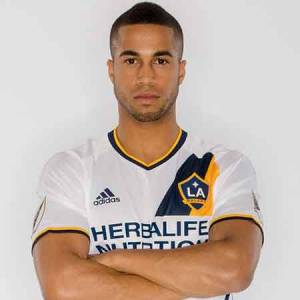 Pele Van Anholt is a Dutch footballer who is currently on a recovery break from ACL surgery. He is currently signed to Eredivisie club NAC Breda. Anholt last played for LA Galaxy in Major League Soccer as a fullback.

The footballer has played for many clubs like SC Heerenveen, Emmen, and Willem II. Let's take a look at Anholt's wiki to gain information regarding his career, net worth, early life, personal life, family and more.

Kinsley Pele van Anholt was born on April 23, 1991, in Sneek, Netherlands. This currently makes him 27 years of age. Anholt is of Dutch nationality and he is of Dutch-Ghanaian and Indonesian descent.

There is not much information regarding his parents, siblings, and education. Furthermore, Pele van Anholt was interested in football from a young age. He played for CAB Bolsward and SC Heerenveen as a youth football player.

Pele van Anholt began his professional career with SC Heerenveen in 2009. He made 127 appearances for the club and scored two goals. Anholt played on loan for FC Emmen from 2010 till 2011.

The football player ended his contract with SC Heerenveen in 2016 and was signed to Willem II. Pele van Anholt made 23 appearances for the team. He signed with Major League Soccer club LA Galaxy on July 12, 2017.

Pele played five games with the club before tearing his MCL and ACL on August 29, 2017, in a 3-0 loss to San Jose Earthquakes.  Anholt underwent a surgery in September 2017. However, he was declined the 2018 contract option by LA Galaxy on November 27, 2017.  Later the football player signed with NAC Breda.

Surgery went well! On the road to recovery and coming back stronger #keep#smiling

However, Anholt is yet to play for the club on the field as he is currently on the road to recovery.

Talking about his personal life, Anholt is currently in a relationship. He has been together with his girlfriend Sharianana for more than three years now. His partner is a beautiful and supportive woman. The couple loves each other and they are leading a blissful life.

I’m happy with you!! #togetherstronger

The two are yet to make things official. They might take their relationship to the next level in the future. Furthermore, Anholt is loyal to his girlfriend and he is not involved in any affairs. There have been no rumors of their separation so far.

Pele Van Anholt has earned a fortune from his career as a professional football player. He lives a comfortable lifestyle and his salary has allowed him to do so. Anholt has not revealed his exact net worth to the fans as of now.

However, it is estimated that his net worth is around six figures. Anholt's current market value is £540k. His net worth might increase in coming days when he returns back to the field.

The young football player has a perfect height of 5 feet 7 inches and he weighs 71 kg. Pele van Anholt has quite a fan following on his social media accounts like Twitter and Instagram. He keeps his fans updated and shares news regarding his ventures and personal events. Furthermore, information about his bio can be found in his wiki.