Pawel Dawidowicz is a professional footballer who plays for the Italian club, Hellas Verona. He is also a national player who represents the Poland national team at the international level. Besides, Dawidowicz plays as a defender and wears jersey number 27.

Furthermore, Dawidowicz is one of the most skilled players in his nation who has received various chances to play for multiple teams. So, Dawidowicz has gone to different countries like Portugal, Germany, and Italy to represent different clubs.

Pawel Dawidowicz's Contract With His Team Is Impressive: How Much Is His Salary?

Currently, Dawidowicz is playing for Hellas Verona, and he joined the team after receiving a massive deal worth €3.50m. According to Salary Sport, Dawidowicz earns £7,800 per week and £405,600 per year playing for the respective team. So, it becomes clear that Dawidowicz's salary is impressive, and it will surely increase in the future.

Besides, his current market value is €4.50m, while the highest amount was €5.00m on December 28, 2021. Meanwhile, Dawidowicz has not only played for Hellas Verona but has been a part of other teams in the past too. So, being associated with various squads, Dawidowicz has taken home a decent profit.

Considering this point, we can say that, Dawidowicz's net worth is not less than a million dollars. Being a professional footballer, Dawidowicz also makes money from sponsorship and brand endorsement. The Hellas Verona's defender wears outfits of Nike.

Dawidowicz Has a Baby Boy With His Wife

Moving into his love life, Dawidowicz is a married man and he lives happily with his wife, Suzanna. It is unknown when they got married as the footballer prefers to keep his personal matters away from the public domain. 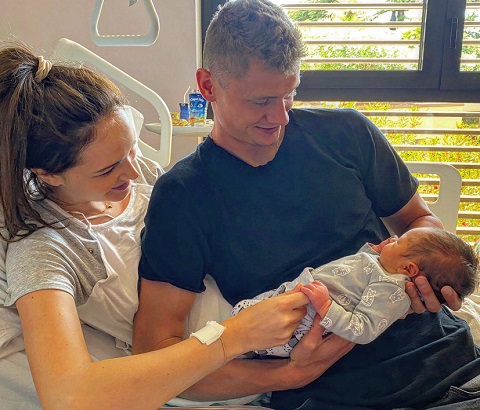 Pawel Dawidowicz with his wife and their son SOURCE: Twitter @HellasVeronaFC

But exploring some sources, we can say that, the loving pair have been supporting each other for many years. Being married for a long time, Dawidowicz and his wife, Suzanna have already started a family of their own. In July 2022, the twosome welcomed their first child, a baby boy named Adam.

So, now, the family of three lives happily and they maintain a distance from the media. Not to mention, Dawidowicz has kept his Instagram account private.

Dawidowicz Has Been Playing Since 2011 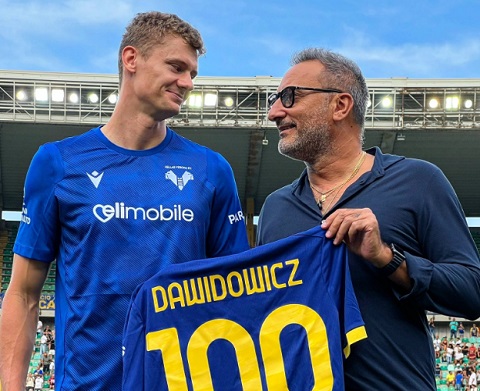 And on July 1, 2019, Dawidowicz signed a deal with Hellas Verona. Apart from that, Dawidowicz has also played for the youth teams of Poland. On November 17, 2015, Dawidowicz made his debut for the senior team after playing against the Czech Republic in Wroclaw.

Dadwidowicz was born to his Polish parents on May 20, 1995, in Olsztyn, Poland. His full birth name is Pawel Marek Dawidowicz. His mother's name is Dorota Dawidowicz, while his father's name remains missing from the web.

Furthermore, Dawidowicz holds Polish nationality, and he peaks at the height of 6 feet 2 inches (1.89 m).