Paul Scholes is a former footballer, who played his entire football career with the Manchester United and for the English National Football Team as well. Currently, he is the co-owner of Salford City and television expert for the BT Sports.

Also regarded as one of the best defenders, Scholes has an estimated net worth of $27 million. He is married to his teenage sweetheart Claire Froggatt and has three children.

Scholes has maintained a pretty of bank balance through his career earnings. He has a whopping net worth of $27 million as of 2019. His salary in 2012 while playing for Manchester United was reported to be 3.12 million GBP.

He reportedly earned the net worth of about $18 million until his retirement in 2013. His weekly wage at the end of his career with Manchester as a player and coach was reported to be £80,000. 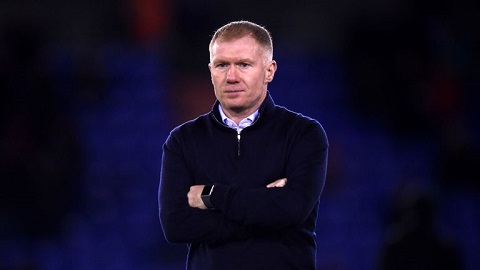 Scholes also made his appearance in EA Sports FIFA video game series. He was also the face of the international edition of FIFA 2001. In addition, he also endorsed a popular sportswear company like Nike, which helped him to build his net worth. He appeared in several commercials of the Nike.

Scholes currently live in his house in Manchester, the United Kingdom with his wife and three children. The price of the house is believed to be about £10 million. Besides, Scholes likes to drive Audi and Mercedes cars

Paul Scholes married his college sweetheart Claire Froggatt after having an affair for several years. The duo tied the knot in  February 1999 in Wrexham with the presence of some important guest and relatives.

It is almost two decades of their marriage and the love and passion for each other are increasing with every passing day. There is very less chance of divorce occurring between them.

They have two sons named Arron and Aiden and one daughter named Alicia. Unfortunately, his youngest kid Aiden is undergoing with the autism.

Scholes son Aaron is also a footballer who played for the Stalybridge Celtic under-12 football team.

Scholes is an asthmatic patient and suffered from Osgood-Schlatter disease. Currently, Scholes resides in countryside nearby Grasscroft in Great Manchester.

Unlike other celebs, Scholes also has been part of controversy during his professional career. He has been highly criticized for receiving 99 yellow cards in the premier league history and getting four cards.

Scholes was born on 16 Nov in 1974 in Salford, England at Hope Hospital in Salford, Greater Manchester. He is the son of Stewart and Marina Scholes. He holds an English nationality and is of white ethnicity.

Scholes moved to Langley, Greater, Manchester when he was 18 years old. Scholes attended St Mary’s RC Primary School in Langley, where he lettered in football and cricket.

On July 23, 1993, Scholes became one of the prominent members of Manchester United, shortly after, during 1994-95, he landed his steps into the senior squad.

Scholes continued playing with until he took retirement in 2011. Even though he made the decision of retirement, he convinced himself to more football for Manchester United. Eventually, he retired in 2013. Some of the popular players, he played with, in Manchester are Cristiano Ronaldo, Wayne Rooney, Carlos Tevez, etc.

Scholes represented the English national football team, from 1997 to 2004. He also participated in the 1998 and 2002 World Cups as well as the UEFA Euro 2000 and Euro 2004 tournaments. His teammates in the National team were David Beckham, Michael Owen, Steven Gerrard, etc.

Scholes joined League Two side Oldham Athletic as a manager on 11 February 2019, having been cleared to take the position by the English Football League in light of his ownership of Salford City. However, on 14 March, he resigned as manager of Oldham, following the interference by club owner Abdallah Lemsagam in the first-team affairs.