Pat Freiermuth is a rising American football player. He played in the NCAA Division I for the Pennsylvania State University Men's Football team, Penn State Nittany Lions. Pat rose to fame after Pittsburgh Steelers drafted him in the round two, overall 55th pick in the 2021 NFL draft. He plays as a Tight end for the team.

Pat Freiermuth was born Patrick John Freiermuth on October 25, 1998, in Newburyport, Massachusetts. He is among the three children born to John Freiermuth and his wife, Dianne Freiermuth. He has a brother named Tim and a sister named Megan. His father played basketball at St Anselm. Pat graduated from Brooks School and enrolled at Penn State University. Freiermuth stands six feet and five inches tall and weighs 117 kg.

Pat started playing American football from a very early age. He played tight end and linebacker on the football team. The multi-talented player also played with the basketball team. Freiermuth completed his High School career with 1531 total yards and 24 total touchdowns. As a senior, The player was named MVP as he had  26 receptions for 613 yards and seven touchdowns. After graduating from High School, Pat committed to play for the Penn State University for his University career.

As a freshman, Freiermuth appeared in thirteen games and started in nine games. He was named to the Sports Illustrated All-Bowl team and selected into the Freshman All-America by The Atheltic and ESPN. Pat finished the season with two receptions for 368 yards and eight touchdowns. Coming into the sophomore year, Pat started in thirteen games and was selected as team caption. He made 43 grabs for 507 yards.

Pat likes to keep his personal life away from the reach of the media. Freiermuth seems to be single as of 2021. There is no rumor of him dating anyone. He is very much early in his career and must be working to make his career bright. To do so, he is currently staying away from a romantic relationship. 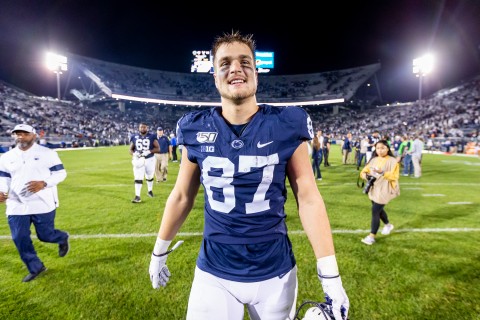 How Much is His Net Worth, Salary, and Earnings

Pat is about to start his professional career. He will be signing a multi-million dollar contract with the team. The base salary of an NFL rookie player is more than $660,000. Some sources claim him to have signed a $6,028,190 contract with the Steelers.