Landon Dickerson is an American football center for the Philadelphia Eagles of the National Football League. He was picked by the Eagles in the second round (pick 37) of the 2021 NFL Draft.

Dickerson was born in Hickory, North Carolina on September 30, 1998. He grew up in Hickory and attended South Caldwell High School. 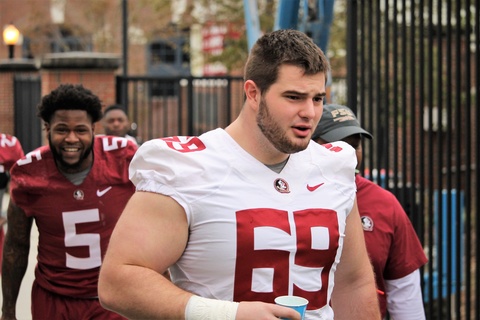 Along with Alabama teammate, Alex Leatherwood, Dickerson won the Jacobs Blocking Trophy. Despite a knee injury, he led Alabama to a Southern Conference title and a national championship in 2020. His efforts on the offensive line allowed him to be a unanimous First Team All American, and Rimington Trophy Winner. He also helped Alabama's offensive line win the Joe Moore award in the fall of 2020, an honor given to the nation's top unit.

Bama Online reports Dickerson's contract with the Philadelphia Eagles is set at $8.6 million with a signing bonus of $3.6 million. This implies, his net worth, as of May 2021, is already in the region of more than $3 million supposing that NFL rookies are at the least guaranteed the signing bonuses.

If the Eagles choose to sign the former Crimson Tide's center, he should be taking home around $2 million a year.

Dickerson recently got engaged to his girlfriend, Brooke Kuhlman, a former beach volleyball player from the Florida State University.  She also played for the University of Alabama. She was 6A District Player of the Year in 2015 at Barron Collier High School and the winner of the BVCA National Championship with Alabama.

The couple started dating in May 2017. On the second anniversary of their relationship, Kuhlman penned some heartfelt words for her footballer boyfriend.

"Happy 2 years to my best friend and biggest supporter you never fail to make me laugh and have always been there for me. I love you so much," wrote the University of Alabama alumna. 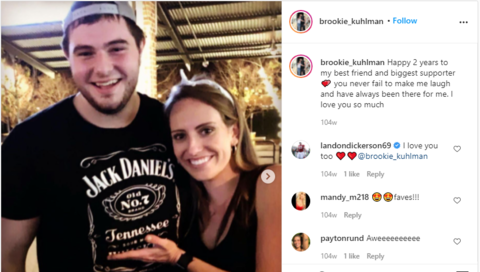 On May 8, 2021, the former Crimson Tide's no 69 got down to his knees for his girlfriend in Alabama's Gulf Shores. The couple subsequently put a ring on their love. 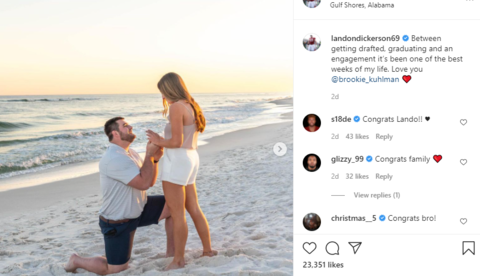 The 22-year-old NFL rookie shared the picture of himself proposing to his girlfriend while listing things he was grateful for in the past week.