Paqui Kelly came into the spotlight as the wife head coach of LSU Football. Moreover, Paqui's husband is none other than Brian Kelly. Before joining LSU, Brian worked as the head coach for the Notre Dame football team.

But enough about the talented coach Kelly. Paqui also recently became a national hero after surviving cancer and started to spread awareness about breast cancer. Despite leading a life at the smack-dab center of the spotlight, much about Paqui remains unknown. 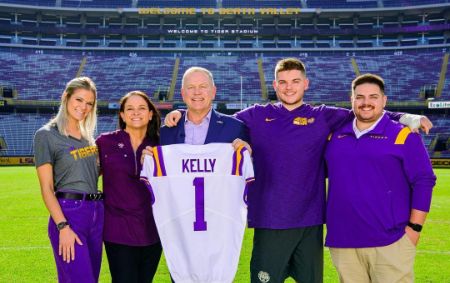 Paqui and Brian exchanged their sacred vows decades ago in an intimate setting. Moreover, the duo, Brian and his wife, tied the knot on July 2nd, 1994.

The Kellys also welcomed three children in their wedlock. Moreover, the names of Paqui's kids remain hidden from the world. But, as seen on Brian's Instagram post on mother's day, he and his spouse gave birth to two sons and a daughter.

As seen in the picture, Paqui and Brian's kids appear to be in their 20s. Moreover, the names of Brian's kids are Kenzel Kelly, Patrick Kelly, and Grace Kelly.

No Trouble in Paqui Kelly's Marriage?

Throughout Kelly's marriage with her husband, Paqui and Brian Kelly shared everything. Moreover, Brian even said in an interview that he'd need to run by his wife about changing teams. 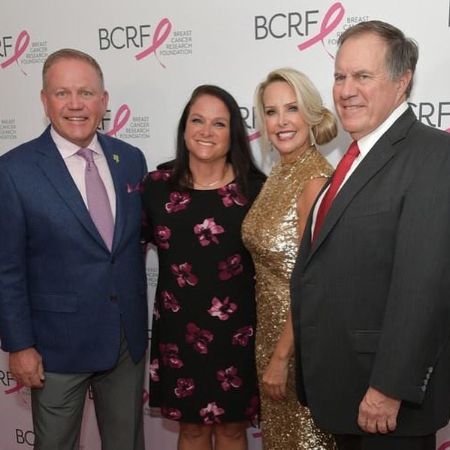 And on the topic of sharing, Paqui enjoys her life away from the spotlight. As such, all of her past relationships remain a mystery to the media. Likewise, Brian also leaves his past lover hidden from the people.

So far, both Paqui and her husband remain free of any ugly rumors. Similarly, Brian and his spouse stay away from adultery. However, the head coach's wife faced a significant problem recently, more on which below.

Paqui's decision to take a mammogram saved her life. At the age of thirty-seven, Kelly decided to take the test. And lo-behold, the result showed lumps, and the following year Brian's wife started to undergo chemotherapy. Kelly also later stated her choice to go through a mammogram before turning forty saved her life. Moreover, Paqui always assumed her family had no history of cancer patients. That later changed when her sister Monie was also diagnosed with breast cancer.

Things for Paqui and her family led an everyday life till 2007. The head coach's wife once again had breast cancer. Finally, in 2008, Kelly went through a double mastectomy.

After Paqui Kelly underwent surgery, she and her husband Brian Kelly started Kelly Cares Foundation. The Kellys created the foundation to promote breast cancer awareness and its high cure rate in the early stages.

Over the years, Paqui's foundation successfully raised millions of dollars. Likewise, Kelly Cares Foundation collected over $1.4 million for the cause in 2010. Similarly, in 2021 Kelly's foundation donated over $5.8 million to the cause.

How rich is Paqui Kelly? Learn about Kelly's Net Worth

Over the years, Paqui Kelly faced many obstacles. However, Paqui never had to go through financial troubles. And currently, Kelly and her husband, Brian Kelly accumulated a massive fortune.

Currently, Paqui holds a roughly estimated net worth of $10 million. Moreover, most of her wealth comes through her marriage. Kelly also remains active as the president of the Kelly Cares Foundation.

Brain, on the other hand, holds an ever-growing net worth. Presently, the head coach of the LSU Football team enjoys an approximated net worth of $85 million. Moreover, LSU offered Kelly a whopping $100 million as a salary along with benefits for ten years.

Paqui and Brian currently live in Louisiana, USA. However, the details about Kelly's assets and properties stay a complete mystery. And as a result, the cars and houses owned by the Kellys remain hidden in the shadows.