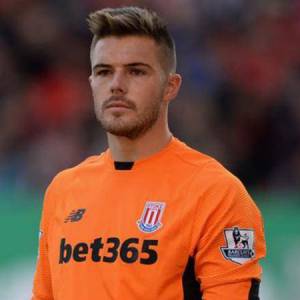 One of the well-known footballers, Jack Butland currently plays as a goalkeeper for England national team and Derby County on a loan from Stoke City.

Jack Butland was born on March 10, 1993, in Bristol, England. He was born to his father, Matt Butland and mother Jill Butland and grew up in Clevedon. He studied at Yeo Moor Primary School and Clevedon Community School.

Butland belongs to white ethnicity and holds a British nationality.

Jack Butland began his youth career joining youth team of Clevedon United. He then joined the Birmingham City in 2007. Besides, he was a keen rugby player. After three years in a junior team of Birmingham City, he was promoted to a senior team in 2010.

Jack Butland signed his first professional contract with Birmingham City in March 2010. Later, he was honored with the Birmingham City’s younger player of the year at the end of 2009-10 season. He missed several games after his hand broke and required treatment. So far, he has played in 29 games for the team.

Jack Butland was further sent on a loan to Cheltenham Town in 2011. He became the Young Player of the Year by the voting system. He spent 2011-2012 season with the team. He left the club after making 24 appearances for the club.

Jack Butland then signed four and half year contract with Premier League Club, Stock City with the transfer fee €3.80 million on January 31, 2013. After 54 matches with the club, he went to his former club, Birmingham City on an emergency loan in 2013.

Butland then went to Derby County on a one month loan on October 20, 2014. He extended his contract with Stock City in March 2015 until 2019. He has played three games where he kept two clean sheets against Tottenham Hotspur and Burnley. So far, Butland has played 6 matches for the club.

Jack Butland has represented his team at junior and senior levels that include England U-16, U-17, U-19, U-20, and U-21. He also gave his appearance in the Great Britain Olympics for the 2012 London Olympics. He has played 5 games for Great Britain.

Butland has been honored with UEFA European U-17 Championship in 2010 along with his U-17 team. There were rumors that he could replace David De Gea's vacant position if he moved to the next team.

Currently 25, Jack Butland was in a relationship with his childhood sweetheart, Steph Parsons since 2007. The couple first met at school in Somerset. They separated in 2016 after Butland started his love affair with Annabel Payton, an Emirates crew worker air hostess.

His ex-girlfriend, Parsons has a degree in Sports and Exercise Degree and currently works as a sports massage therapist in Bristol.

Butland met Annabel when he was on a vacation in Dubai for a mid-season break. His girlfriend, Payton works as cabin crew for Emirates Airlines. The pair is often seen attending events together.

Besides, Jack Butland Audi RS5 was stolen from his house Walsall in January 2014. He donated £5,000 to the Great Britain women’s deaf football team in December 2015.

It seems Butland has also a keen interest in world expensive game Golf and often shares video and pictures while playing gold via Instagram. He is often seen enjoying his profession with his teammates Marc Muniesa, Bojan Krkic, Joselu Mato etc.

Net Worth and Salary of Jack Butland

The main source of income for Butland’s net worth is his professional career in football. Moreover, endorsements are also a source of his income.

Currently, Jack Butland's market value is estimated to be €15 million. He used to receive around £50,000 per week i.e about £3 million as a salary while at Stoke. As mentioned by The Sun, his net worth is estimated to be around £20 million. Butland had an Audi RS5 worth around $70,900 which was stolen from his driveway in Walsall.

Butland uses the show model of Nike Hypervenom Phantom III DF FG since July 10, 2017. He is a brand ambassador for Nike and earns a good sponsorship amount from it.

With the tremendous amount of money, Butland, no doubt lives lavishly.  However, there is no information about how much his house, apartment or mansion.

Butland is a big dog person and owns a golden English Cocker Spaniel breed or gun dog and often posts snaps via Instagram. The price of the dog is around $1200. He is often seen enjoying his vacation in an expensive destination like Island, hills, concerts, public places, beach, swimming pool etc.

Butland often shares the pictures of expensive and new model gloves and shoes via Instagram.