A Danish American football guard, Hjalte Froholdt is currently signed to the New England Patriots of the National Football League (NFL). The team drafted him in the fourth round of the 2019 NFL Draft, with 118th pick.

Svendborg, Denmark native, Hjalte Froholdt was born on August 20, 1996, under the star sign Leo. He holds Danish nationality. 6 ft 5 in tall, he played college football for Arkansas Razorbacks football team at the University of Arkansas.

Besides, he might have earned a decent sum through his college career. As of 2019, his net worth is approximately $0.5 million.

Hjalte Froholdt is currently in a relationship with his long-time girlfriend, Ashley Diaz. The couple met at the University of Arkansas, where she played softball for the college team.

In 2017, her lady discloed that they are together for three years but the duo started sharing each other picture during Froholdt's sophomore season in 2016. It seems like, they began dating in 2016.

For now, the pair is living a blissful life, sharing beautiful moments as well as supporting each other's career.

Hjalte Froholdt was born to Danish Parent: Hans and Lisa Froholdt. He was raised alongside his sister lea. Most recently the brother and sister went trekking in the highest mountain in the Faroe Islands, Slættaratindur. 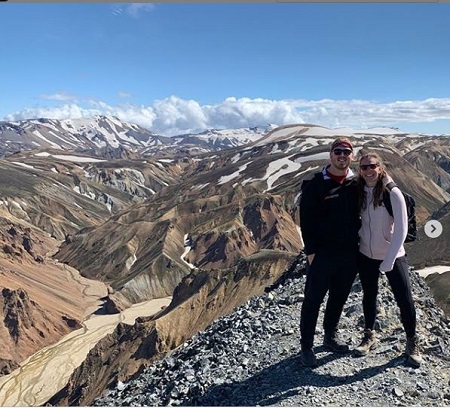 He started playing football for his hometown team, Svendborg Admirals. Moreover, he attended IMG Academy in Bradenton, Florida, United States, where he played competitively during his sophomore year of high school as a foreign exchange student in Ohio.

After graduation, he signed to the University of Arkansas and earned 2018 Second-team All-SEC while playing for the college football team.

In the 2019 NFL Draft, Hjalte Froholdt was picked by the New England Patriots in the fourth round with 118th overall pick, becoming the second Denish to be drafted by an NFL team after Morten Andersen in 1982.

In Week 4 of the preseason against the New York Giants, he sustained a shoulder injury and was subsequently placed on injured reserve list alongside Yodny Cajuste, Stephen Gostkowski, and James Develin.