Stephen Gostkowski is an American football placekicker for the New England Patriots of the National Football League. He was drafted by the Patriots in the fourth round of the 2006 NFL draft.

Gostkowski also played college football and baseball for the University of Memphis. He is the most accurate kicker in Patriots history. Let us take a look at his wiki to find out about his early life, family, career, net worth, personal life and more.

Stephen Gostkowski Salary and Net Worth

Stephen Gostkowski is a highly paid player and receives a fortune amount of salary. His total salary boosted his net worth to $15 million. His base salary for the 2018 season is reported to be $3,200,000. He will earn $3,500,000 in total including roster bonus and incentives.

Stephen Carroll Gostkowski was born on January 28, 1984, in Baton Rouge, Louisiana, United States. He is an American by his nationality and his ethnicity is white.

Gostkowski's birth sign is Aquarius. His parents are Larry Gostkowski and Cindy Gostkowski.

Moving on his professional life and career, Stephen Gostkowski went to Madison Central High School in Madison. He graduated in the year 2002. While studying there, he delivered his talents on several games. Gostkowski was not only good in the game of football but he also showed his proficiency in the game of baseball and soccer. He attended the University of Memphis for his higher education.

While studying there, Stephen Gostkowski played for the Memphis Tigers football team and chosen the subject exercise and sports science. He also played baseball for the University.

Stephen Gostkowski is the second player in the history of NFL to score 500 points in his first four seasons of the league. Despite missing half of the 2010 season due to a leg injury, Gostkowski became the first player to score 1000 points in his first eight season in the league. Patriots also won the Super Bowl two times in the year 2015 and 2017 with Stephen Gostkowski as their placekicker. He became the Patriots' all-time leading scorer surpassing Adam Vinatieri.

Digging on his personal life, Stephen Gostkowski is a married man. Gostkowski is married to his spouse Hailie Gostkowski. He is a happily married man. The football player loves his wife very much. Gostkowski first met his wife in an anatomy class while in college. Hailie is a nurse by profession. The couple tied the knot in the year 2008.

The pair is blessed with three children, two sons, and a daughter. His sons are Slayden Kyle who was born in December 2010 and Gannon William. Gostkowski is not only a responsible father but also a loyal husband. His relationship with his wife is perfect and there is no any issue of divorce between the lovely couple. 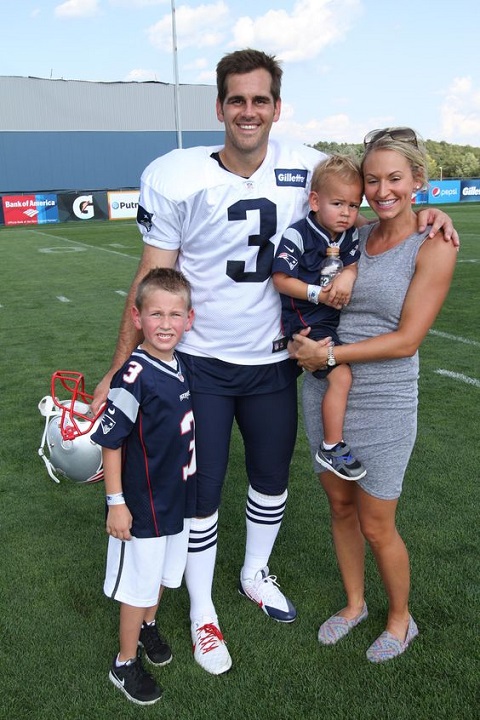 CAPTION: Stephen Gostkowski with his wife and children SOURCE: Fabwags

Gostkowski hasn’t cheated his wife and he does not engage in an extramarital affair. In fact, his wife was reportedly his first love and first girlfriend.  Stephen Gostkowski has also never been part of any controversy or rumors. He is straight by his sexuality.

The dashing and handsome football player is 34 years old as of now. Gostkowski has a perfect height of 6 feet and 1 inch and his build-up weight is 215 lbs. He is not very active on his social media accounts. Moreover, information about his life and bio can be taken from Wiki.

On February 4, 2019, Stephen Gostkowski appeared on the Super Bowl LIII one day after his grandfather, William Klick, died. He was the highest scorer in New England’s 13-3 win over the Los Angeles Rams.

As per Mike Reiss, Gostkowski wanted to dedicate his last field goal for his grandfather who he called “the kindest, funniest man I knew.”