Guillem Balagué is a Spanish soccer journalist, writer, and expert. He is a regular expert on the Revista de la Liga Sky Sports show. Further, he has also written for several British newspapers and Spanish newspapers.

As of 2019, he reportedly has an estimated net worth of over $2 million. However, his exact salary is yet to be revealed in the media. Further, there isn't information about his current marital status.

Guillem Balagué was born in 1968 in Barcelona, Catalonia, Spain. However, there aren't any details about his birthplace. He holds a Spanish nationality and belongs to White ethnic group. Further, the details about his parents and siblings are not in the media yet.

Talking about his education, he is a graduate of Autonomous University of Barcelona (BJ) but the detail about his field of study is yet to be surfaced in the media.

Guillem Balague Net worth and Salary

The Spanish sportscaster/anchor Guillem Balagué has an estimated net worth of $2 million. The Spanish TV presenter, Guillem has been able to earn fame with immense experience in the sporting world. However, he hasn't mentioned any information about his salary.

It is speculated that he earns a hefty amount of income from his career as a sports Journalist.

As per the reports, the sky is one of the highest paying sports networks. Since Balague is one of the popular as well as a regular reporter of the network, he earns a decent amount of salary from the network.

Further, he is also an Author of the many books, writing the biography of many well-known footballers like Lionel Messi, Cristiano Ronaldo and many more. The books got huge popularity and collected decent royalty which certainly helped him to collect a massive net worth.

In June 2008 Balagué launched his own personal website with a blog, news and the opportunity to interact directly with him. Balagué is a journalist and has written for a number of English and Spanish newspaper. He is currently preparing a soccer documentary and the first biography of Pep Guardiola in English. 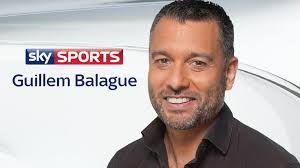 He has written articles in the British newspapers like The Times and The Observer and a weekly column in the free daily commuter newspaper The Metro, which mainly features stories about continental football.

He is also renowned for his work with the Spanish football newspaper AS and the national radio station CADENA SER in Spain, where he regularly appears on phone-ins.

Unlike his professional career, there aren't even single hints about marital status.  It was a tough task to find out about his personal life and most importantly about his relationship status currently.

On this goal Messi scored as a kid dozens of goals

The journalist doesn't seem to be open about his personal life and has kept his life low profiled. However, he might be married and living a happy life with his children and wife. Further, there aren't any rumors about his past affairs, relationship, girlfriend and divorce.