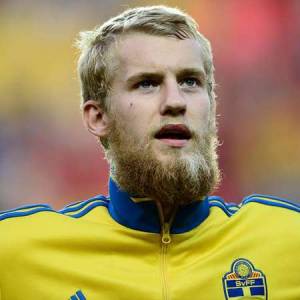 Filip Viktor Helander better known by the name Filip Helander is a Swedish national footballer playing for Serie A side Bologna as a center back, wearing the shirt no, 18. He has also been featuring in his national games since 2017.

A native of Malmo, Sweden, Filip Helander was born on 22nd of April 1993, to Mats Helander and Annika Helander. His birth sign is Taurus. Regarding his nationality, Helander is Swedish.

Filip began playing football for Kvamby IK. Then he switched to Husie IF where he remained till 2006. At the age of 14, he joined Malmo FF.

Filip Helander's Net Worth and Endorsement

Twenty-three-year-old star footballer, Helander plays for Serie A side Bologna where he earns $44,181 as his weekly wage which is around $2.2 million per annum. As of 2018, he has an estimated net worth of around $3 million. His current market value is recorded $2.48.

His prime source of income is his professional football career. He has not revealed any information about endorsement deal or sponsorship but expected to have the agreement with several local and renowned brands.

Following various youth level at Malmo, Filip was promoted up to the senior team in the year 2011. On 17th October, he made his first-team debut against Syrianska, where played beside Pontus Jansson prior to being replaced by Daniel Andersson after the second round of the game.

On 17th July 2012, he signed the contract with the club which would last until the end of the 2015 seasons.

Throughout his 4 seasons with Malmo, Filip played total 72 games and scored 1 goal.

On 22nd July 2015, Filip joined Italian Serie A side, Verona. On 23rd September, he made Verona debut in a match against Internazionale in a 1-0 loss. He just played a season for the Verona, appearing in 24 matches for two goals.

On 31st August 2016, Filip moved to Bologna, signing a season-long loan deal, with an option to buy a player at the end of the season. On 12th June 2017, he signed Bologna on a permanent basis.

He earned the first cap his national side in the year 2017. Further, on 13th November he was named to play against Italy along with his teammate Mikael Lustig and Martin Olsson.

Till date, Filip has won 3 caps with his national side.

6 feet 4 inches tall footballer, Helander is possibly single and unmarried as he has not disclosed any information regarding his love life. It seems that he prefers to maintain distance his personal life from his professional life. Adding up, he is even not active on social networking sites such as Instagram, Twitter, and Facebook.

The information related to his love life is still the subject curiosity.

Mino Raiola Football Agent Mino Raiola Making Millions; How much Net worth does he have? (Affair, Relationship, Family)