Tom Budgen, well recognized by the ring name Aleister Black is currently signed to the WWE under the Raw brand. Before, he competed in NXT of WWE(2016–2019), where he became a one-time NXT Champion. Prior to joining with WWE, he worked for promotions across Europe, the United States, and Japan under the ring name Tommy End.

Alkmaar, Netherlands native, Budgen, was born on 19th May 1985, under the star sign Taurus. The Dutchman started his professional wrestling career in the European independent circuit in 2002. In an interview, he revealed that his father grew up in a religious cult, which he credits as the inspiration for a lot of his dark and occult-driven personas in wrestling career.

As of 2019. Tom Budgen has an estimated net worth of $3 million. He makes a bulk of his money through WWE.

As reported, the wrestler has a base salary of  $100,000. Further, his appearances in multiple house show around the globe and TV tapings help increase his income a lot. Adding his TV tapings and house show earnings, he makes about $500,000 per annum.

Additionally, he receives bonuses for his appearances in PPVs, especially Takeover shows. His other income-generating source is considered royalties due to his merchandise sales. WWE has multiple merchandises of Budgen on sale in WWE Shop, earning under 10% of total earnings from his merchandise.

Though there is exact information about his real-estate portfolio, he is said to own a house in Amsterdam and has a car worth $600,000.

In November 2018, Budgen and Zelina Vega, real name, Thea Megan Trinidad, shocked the wrestling world by tying the knot, despite fans having no idea they were even dating.

Initially, Wrestling Inc reported their wedding news, but it's unclear where or when they occurred. Later, David Herro, who officiated the ceremony, shared pictures from the big day on his Twitter account.

His Wifey Is Signed Under Raw Brand

Born on December 27, 1990, Zelina Vega is Queens, New York City native who performs on the Raw brand of WWE. Previously, she worked in TNA under the ring name Rosita and for various other independent promotions under her real name.

Besides, she has appeared in the documentary Children of 9/11 and portrayed wrestler AJ Lee in the film Fighting with My Family. In WWE 2k19, she appears as a manager as well as a playable character in WWE 2K20. 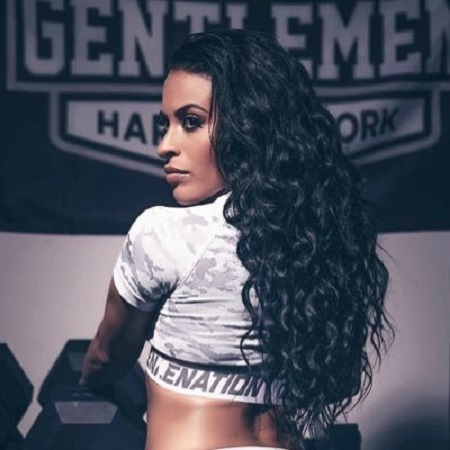 Before Budgen Vega was in a relationship with former WWE star Austin Aries. They dated when the two were both in WWE development.

In June 2016, Budgen signed to the WWE. At 2017's NXT TakeOver: Orlando, he made his WWE debut for NXT. In April 2018, he defeated Andrade Cien Almas to win the NXT Championship at NXT TakeOver: New Orleans. He held the title until July 2018 when the Tommaso Ciampa defeated him.