Ondrej Duda was born on December 5, 1994, in Snina, Slovakia. He is the son of Ondrej Duda Sr. and his wife. Duda is yet to share a word about his parents and his early life in public. Duda stands five feet and eleven inches tall and weighs 75 kg.

Ondrej started training with the youth team of Snina in his hometown. He played with its youth team until 2011 and then moved to Kosice in 2011 and played for the next two seasons. Duda made his professional debut in 2012 at the age of seven with Kosice against Slovan Bratislava. In early 2014, Ondrej decided not to renew his contract with Kosice and moved to Legia Warsaw on a four-and-a-half-year deal.

In the next two seasons, Ondrej appeared in sixty-seven games and scored ten goals for the team. In July 2016, Duda decided to move to Bundesliga and signed a five-year deal with Hertha Berlin. Unfortunately, he could not appear in the first season with a knee injury and underwent knee surgery in November 2016. In 2017, Duba led the team to a famous 2-0 victory over the German champions. In the 2018 season, Ondrej scored eleven goals and had six assists. Unfortunately, he could not take his form in the following season.

In mid-2019, The Slovakian player moved to Norwich City for a loan and appeared in ten games. In September 2020, Ondrej signed a four-year contract with the Bundesliga side, FC Koln. Talking about his international appearance, Ondrej has played for the Slovakia U19, U21, and senior team. He scored three goals for the U21 team. Duda made his international debut for Slovakia on November 18, 2014. Ondrej has appeared in forty-seven international matches and scored five goals. Duda is part of the 2020 EURO team along with Marek Hamsik and Milan Skriniar.

Ondrej is dating his longtime girlfriend, Amanda Bnasc. The love birds have been together for more than six years. Nothing much about their first meeting instance is shared in the public. Duda is an active social media user and keeps sharing a lot of pictures with his girlfriend. However, he has not shared a word about his girlfriend in public. 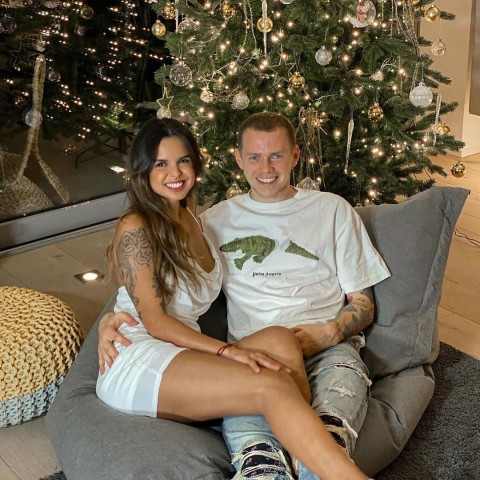 Although It's been more than six years of their relationship, The duo is yet to get engaged or walk down their wedding aisle. However, Amanda is very much supportive of her boyfriend and keeps attending his games.

Ondrej Duda's Salary and Net Worth

Ondrej Duda has an estimated net worth of $2 Million. He has accumulated most of his net worth through his salary and contract. Duda has an annual salary of  € 1,150,000 with FC Koln. He is very much early in his career and will be adding much more in the future.