Marek Hamsik is a Slovak professional footballer who last played as an attacking midfielder for a Swedish club, IFK Goteborg who competes for Allsvenskan, a top division football league in Sweden. Hamsik is set to play for the Turkish League team, Trabzonspor from July 1, 2021.

Hamsik was born in Banska Bystrica, Czechoslovakia on July 27, 1987. He is prominently known for being a first striker for an Italian team,  Napoli, for whom he made a total of 408 appearances, scoring 100 goals.

Hamsik trained at the youth academy of Slovan Bratislava, a football club based in Bratislava, Slovakia. He was featured in six games for Bratislava's first team and scored one goal before joining an Italian team, Brescia in 2004, aged 17. In toto, he made 65 appearances for Brescia including an impressive 2006-07 season, where he scored 10 goals in 40 matches.

On June 28, 2007, Hamsik signed with Napoli under a five-year contract playing his first match for the team on August 15, 2007, against Cesena in the first round of the Coppa Italia. The Italian Blues won the match 4-0, with the Slovakian setting the opening and the second goal himself.

During his 11 and half years with Napoli, Hamsik appeared in more than 350 games whilst finding the back of the net on 100 occasions including two Coppa Italia titles and one Supercoppa Italiana.

He was also named to Serie A Team of The Year on three occasions as a Napoli forward. He finished two Serie A seasons with the highest assists. After Napoli, Hamsik joined a Chinese club Dalian Professional making his debut in a 1-1 away draw against Henan Jianye. He then moved to IFK Goteborg in March 2021and played his introductory match on April 19, 2021. He netted his first goal for the club on May 17, 2021, in Goteborg's two-all draw against IK Sirius.

In June 2021, he committed to play for Trabzonspor on a 2-year contract. The nine-time Slovakian footballer of the year has been active on national duty since 2007 and to date has found the net for Slovakia national football team on 26 incidents distributed throughout 127 appearances.

Marek Hamsik's Net Worth and Earnings; How much does he earn annually?

Taking his cash flow (since 2014) into consideration, Hamsik salaries reportedly sum up to over $60 million. All along from post the 2014 Fifa World Cup until his departure from Napoli, he was told of grossing over six million a year exclusively in the form of salaries.

His combined payouts from the late 2000s to early 2010s also deserve a mention which by some accounts was reportedly ahead of $15 million or so. 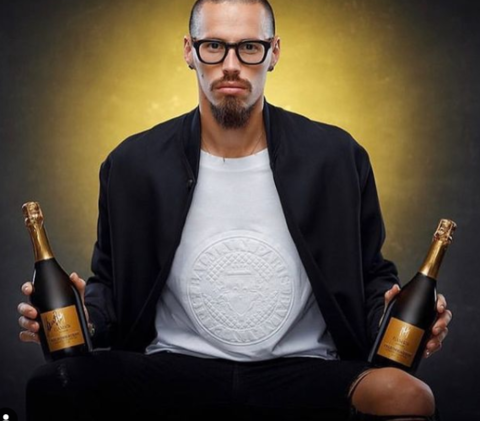 Hamsik is also among the European stars to have enjoyed extravagant salaries in China. The Napoli all-time appearance holder was reported to have cashed out $22.6 million from his contract with Dalian - paid to him in two installments.

His annual salary, by insiders, was stated of being around $10.2million. He was also the biggest taker in the squad with his weekly wage tallying beyond $250,000.

This was supposedly three times what he was earning in Italy. Goal reports, Hamsik netted in $12,000 a month playing for the Swedish side, Goteborg. With his on-the-pitch earnings estimated at over $80 million $90 million, his net worth has been surmised of being anything from $40 million- $50 million.

Hamsik also has a substantial number of sponsorship deals and personal ventures adding to his well-established football fortune; some of them being Tiger Energy Drink, Hamsik Wineries, Dr. Witt, Campari Martin, and a bounce park.

The mohawk footballer is presumably the richest footballer in his nation who has appeared to be fond of luxury cars - a few look on some of those four-wheelers and one can easily guess how much affluent Hamsik has become throughout his football career. The wedding took at the Tartuf manor house in Beladice, a village in Zlate Moravce District of the Nitra Region in western-central Slovakia. Mrs. Hamsik was believed to be a former handball player - a sport in which Hamsik's mother,  herself was a pro. The Slovakian in an interview with Gazette right after his marriage to Franova said he exchanged the vows with his girlfriend after seven years of living together.

The former Napoli star also confessed he was kind of tensed the night before the ceremony. The union took in the absence of his Napoli teammates in part to their 2014 World Cup duties which Slovakia had missed.