The resident of States, Olivia Harlan, reportedly earns around $100,000, as her yearly salary from the network. As of 2018, she reportedly has an estimated net worth of over $1 million. She is currently married to her longtime boyfriend Sam Dekker on July 14th, 2018.

My husband (left) and I (right) are wondering what to be for @Halloween this year? I think we killed this cowboy (and bowl cut) look... what do ya think? #tbt Guess we know what our kids will look like

Kevin Harlan is the father of Olivia Harlan. Kevin is American radio and TV commentator and he is the son of the former Green Bay Packers CEO Bob Harlan. Kevin is the graduate from the University of Kansas and has announced in the high-profile games as well.

During her university days, she covered athletics on the school website and also worked as a football reporter for the Bulldogs college team.

Olivia Harlan Net worth and Salary

Olivia Harlan is one of the most popular ESPN anchors who has made a successful career as a sports anchorman.

Being a popular Sports Network, ESPN is well known for paying a heavy amount of salary to its sportscasters. As Olivia Harlan is a regular ESPN anchor, she earns a decent amount of salary from the network.

The American sportscaster/anchor Olivia Harlan has an estimated net worth of $1 million. As of 2018, the reporter receives an annual salary of $100,000 from her successful reporting career with ESPN and many other networks.

Moreover, she is also working for Fox Sports Southeast and also hosting the show ACC All-Access on Fox Sports. Further, ESPN reporter receives an added sum of money from her radio and TV guest appearances as a sports pundit too.

She took part in the Miss Kansas Teen USA contest and eventually became the winner of the contest in 2010. After the competition, Harlan was able to use her title to start her reporting career in Kansas City, where she focused on promoting good health and education for young children in schools.

PLOT twist haha “I think I got punked”. All good, Harvard QB Tom Stewart ended up having an amazing day (18/27 for 3 TD’s... all while not having practiced ALL WEEK), until he was unfortunately carried off the field on a stretcher in the 4th Q. So sad to see in the final game of his college career, but he should be so proud of this win.

She was also a co-host for the Green Bay Packers camp on a daily web series in 2013 and later in 2014 she worked as an SEC and ACC football correspondent for Fox Sports South and Raycom.

Olivia joined ESPN as a sideline reporter for football college games and became a host for the show ACC All Access on Fox Sports and an Atlanta Hawks sideline reporter in 2015. So far she has managed her three jobs quite efficiently.

Olivia Harlan and Sam Dekker got married recently this year on July 14th at the Horseshoe Bay Golf Club in Egg Harbor. Olivia and Sam were dating each other since 2016.

The relationship went to the next level after Sam proposed Olivia and gifted a diamond ring in their engagement on May 26, 2017. Sam is a professional American basketball player playing for the Los Angeles Clippers. 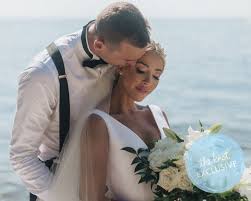 In addition, the couple is also engaged in charity works. Recently they have done a charity work for  Children’s Cancer Family Foundation. They have donated an amount of $15,000 and the community blew added some extra amount of $50,000.

Olivia has a caring and supportive family. She is quite popular in social media with a huge number of followers. Currently, she is living with her husband and they are having a good time together.