NFL's Fittest 37-year-old Player Eli Manning, How does he do that?

Eli Manning for New York Giants looks the same since he joined the club 14 years ago. Currently 37, he is just the same old lanky player and the funny part is, he doesn't even have a single gray hair on his head. So what's the reason behind his fit body, and despite being one of the oldest players he doesn't show any sign of slowing down, so is it just his genetic heritage? Or is he doing somethings differently?

There are people who have the same question, and here is the answer. He is focused on staying fit rather than building his body, unlike his teammate. As per Eli, its all about understanding your physical needs putting the equivalent work and staying with the same type of meal consistently which has helped him keep his performance as well as his youth up.

The two-time Super Bowl-winning quarterback is only 220 pounds. You might even be surprised at what people say, Manning is slimmer than he is seen in your TV screens. 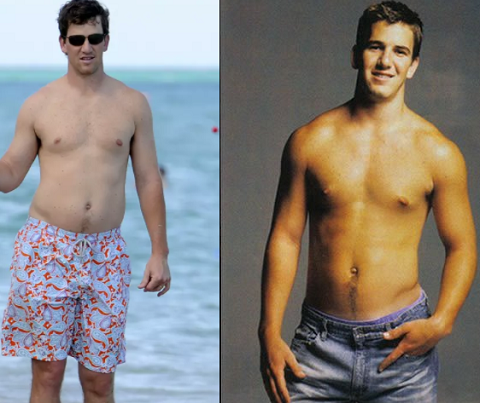 "Manning is the fittest 37-year-old that I've ever seen"

At this point in time where most of the players from his days are seen taking other options after their football run, Manning is still making wonders happen on the field. He's got a tremendous endurance, and is at 37 years of age, he is still one of the most durable quarterbacks there is.

Another QB for Giants Davis Webb and Manning train together, and we were quite surprised at what Webb had to say about his fellow quarterback and his food habit. Here is what Webb said to Eli's food habit which shows his regular food habit that keeps him fit:

"He did a really good job, especially since it was a really short time, Usually you need a month."

If we tell you that Webb and Manning ate the same type of food and as per him they had a body fat percentage kind of challenge, and the 23 years old surely won but in a very close competition, what would be your reaction?

Webb on his win over Eli Manning said:

It was close, but I got him by an inch."

As per his Webb: Eli Manning's breakfast is almost always the same -- oatmeal, fruits (lots of them) and throw in some protein and maybe a smoothie and a water that's what he eats regularly every single day.

"He does the same thing. He's so great with his routine, Same thing for breakfast every day. The same thing for lunch, if it's a similar type of menu. He's a freak when it comes to nutrition."

Eli on this to ESPN has said:

"It's about ... I'm not trying to gain a whole lot of weight or lose weight. It's just maintaining. Feeling healthy"

Manning further said what is his meal roughly look like and why, as:

"It's a lot of veggies, fruits, and proteins for the most part. Carbs are involved to keep your energy up, but make sure you eat the right kinds. I wouldn't say it's an exact diet. Just eat healthily, eat smart"

In between the talks, he admitted that french fries are his guilty pleasure and in between his kitchen time while making fries for his three young daughters, he tries a few of them, maybe to check if it's cooked the right way, or maybe a single bite wouldn't hurt that much.

So, we know him as not so fast QB's in the league but he is very tactical and fills in the gap with all the experience he has, and his game is not at it's best from past two seasons, which we all agree, but this take on his diet and way of life explains that his age has nothing to do with him having a bad year. Let's see what is he going to do this year.

Tyson Fury Vs Deontay Wilder 2 Fight Purses; How much will they Earn from the Fight? Wilder and Fury's Net worth 3 days by Jack Ol

Kamaru Usman on Jorge Masvidal: "I will knock him out if I need to" 2 weeks by Jack Ol