Neemias Queta is a rising Portuguese basketball player. He played with the Utah State University Men's basketball team, Utah State Aggies, in the Mountain West Conference. Queta quit his senior year entered the 2021 NBA draft. Neemias was selected in the First-team-All-Mountian West 2021. The player is also the gold medal winner in FIBA U20 European Championship.

Neemias Queta was born Neemias Esdras Barbosa Queta on July 3, 1999, in Barreiro, Portugal. He is among the two children born to Mica Queta and Dyaneuba Queta. His parents are of Guinean descent and hold Portuguese nationality. He has an older sister. After graduating from High School, Neemias enrolled at Utah State University and played basketball with the team. Queta stands seven feet and weighs 11 kg(245 lb).

Neemias started training for basketball from the age of ten. He started playing in the youth section of F.C Berreirense. His older sister also played basketball and followed in her footsteps. Queta is yet to share a word about his High School stats and records. In August 2018, The player committed to play for Utah State Aggies, rejecting Texas Tech and Creighton's offers. 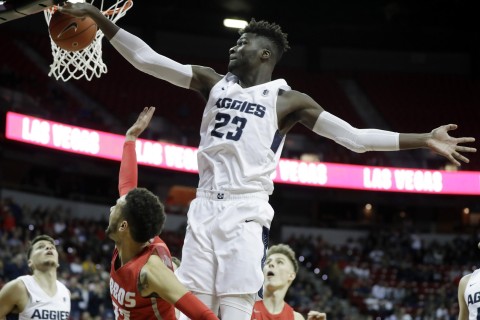 Queta played under the head coach Craig Smith and called him a "very talented player and a fantastic person."On 19 November 2018, he recorded a game-high 24 points, nine rebounds, and five blocks in an 80–63 win over Saint Mary's. At the end of the season, Neemias was named Mountain West Freshman of the Year and Defensive Player of the Year. He could not impact the game in his sophomore year after missing the first nine games with a knee injury.

Neemias has already got a chance to represent his country in the international games. He was part of the Portuguese national under-18 team at the 2017 FIBA Europe Under-18 Championship Division B. In his eight games, he averaged 10.2 points, 8.6 rebounds, and 1.2 blocks per game.

After having a good season, Queta was selected for the 2018 FIBA Europe Under-20 Championship Division B. He averaged 14.1 points, 10.3 rebounds, and 2.9 blocks per game. Neemias led his team in the 2019 FIBA U20 European Championship Division B and won the gold medal. However, The player suffered a left knee injury that sidelined him for the final. Queta averaged 14.3 points, 11.0 rebounds, two blocks per game, and the All-Star Five tournament.

Who is Neemias Queta Dating? Know About His Girlfriend

Portuguese basketball player, Queta does not like to share much about his personal life with the public. Relationship status about the player is still under the radar. He could be single, dating, or engaged.

Net Worth, Earnings, Salary, And Contracts

As per the NCAA rules, A college athlete cannot receive any form of payment to play for the college. Queta is very much early in his career. He is sure to earn millions in the days to come. Many experts pick him in the overall 1st round in the NBA Draft.