Mykola Matviyenko is a professional football player from Ukraine who currently plays in the Ukrainian top league, the Ukrainian Premier League. He plays in the center-back position for the club Shakhtar Donetsk and has been playing for them since 2015. But he can also play in the left-back and right-back positions too. He wears the Number 22 for his current club.

Artem has also represented Ukraine in different competitions. He has been on the national team of Ukraine since 2017. Before he played for the Under 18, Under 19, Under 20, and Under 21 teams of Ukraine.

Mykola Oleksandrovych Matviyenko, famously known by the name Mykola Matviyenko was born on May 2, 1996, in Saky, Ukraine. According to astrologers, his birth sign is Taurus. 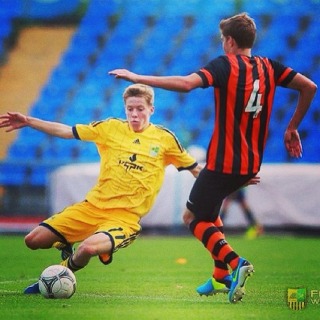 His father's name and mother's name are still not revealed. He has never talked about his parents in the public as well as mentioned them on his social media. So, it is hard to know details about the details of his parents as well as where his family background is.

Born and raised in Saky, he grew up along with his siblings and cousins. He shares his childhood photos with his brothers and sisters.

Read: Who is Heorhiy Sudakov and who are his parents?

Are Mykola and Dmytro siblings?

As per Wikipedia, Mykola and Dmytro Matviyenko are siblings. They were born and raised by the same parents. The Matviyenko brother has an age gap of 4 years old. Mykola was born in 1996 while Dmytro was born in 1992.

The older brother of Mykola is also a professional footballer who is currently playing for the Sevastopol. He plays in the defender position for different clubs. Though he is not having a great career like his younger siblings, he was also in the youth team of Shakhtar Donetsk between 2008 and 2009.

Mykola is the home product of Shakhtar Donetsk. He joined the club in 2009 as a 13-year-old boy. He played for their youth team till 2015 before getting promoted to the senior team.

In 2017, he was sent to loan to two clubs including Karpaty Lviv and Vorskla Poltava. He again return to the club in 2018. Since then, he has been playing for Shakhtar Donetsk.

As per sources, Dmitry is Russian by nationality who opted for the citizenship of Russi after his birthplace Saky was annexed to Russia from Ukraine.

What is the net worth of Mykola?

Shakhtar Donetsk's left-back has already established himself as one of the best defenders in Ukraine. He has been playing for the club since 2015 and has been able to earn a massive salary. Mykola Matviyenko in front of his car SOURCE: [email protected]

His major source of income is from his profession of playing football. Additionally, he also earns from the sponsorship deals and partnerships.

He lives a luxurious lifestyle with his family in Ukraine.

He also owns a black car and a house which he sometimes shares on his social media. Also, he loves going on vacation to different places.

Dmitry signed his professional contract with Shakhtar Donestk on July 1, 2017. And his contract will be ending on June 30, 2025.

As per sources, his salary in Ukraine is estimated to be more than $200,000 approximately. But he is not the highest-paid footballer of the club.

The Ukrainian left-back is sponsored by one of the top sportswear brands named Nike. He is seen sometimes promoting his partner through his Instagram. Especially, he promotes the Nike Mercurial boots on his social media. It is not confirmed about the exact monetary transaction between the two partners.

Nike is also the outfitter of Donetsk's Number 22.

"Our next star guest is the defender of FC Shakhtar and the national team of Ukraine - Mykola Matvienko. Mykola preferred the highest level of comfort and modern luxury of the Mercedes-Benz GLS 400d. Soon we will find out what emotions Nicholas felt from driving a luxury SUV."

He currently owns a black Mercedes given by the company.

His other sponsor's information is not known at the moment.

According to the transfermarkt, Mykola's market value is 11 million pounds in February of 2022.

It is the highest value he has ever had It was just 900 thousand pounds in Jan of 2018, the time he returned to the club from loan.

Is Mykola married or dating anyone?

Shakhtar Donetsk's defender Mykola Matviyenko is currently living a happily married life with his wife, Hanna Matviyenko. The couple has been married for more than 2 years as of 2022. Before getting married, the couple dated for a few years. It is still not revealed when and where he met his wife for the first time but it was before 2016, they started dating. He revealed his relationship with his partner for the first time in December of 2016.

At that time, he shared a photo where he was seen with his former girlfriend holding in each arm. Since then he has been sharing photos with his partner multiple times.

After keeping the relationship secret for some time, Matteo finally revealed his dating life to his fans on social media in July of 2019. In the photo, the couple was seen with each other while they were on vacation.

Since then, they have been together. After dating for some time, the couple decided to get married. The pair are not open considering the wedding date and venue. They got married in their country Ukraine in the presence of their close friends and relatives.

Who is his wife?

Mykola's partner Hanna Matviyenko is a family woman from Ukraine. She is also famous for becoming the wife of Ukraine's midfielder, Mykola. Also, she is the mother of his child.

She has been with her husband for more than years supporting him in his highs and lows. She can be seen all over the social media of the player. 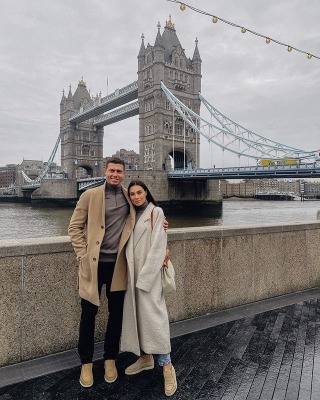 Additional information about her cannot be extracted as she is not much active on social media too.

Read: Who is D Vukovic married to? His relationship status and married life

Previously, he announced that his wife was going to give birth to a baby. And as expected, he and his wife were blessed with a cute daughter. She gave birth to their daughter n August 29, 2019. He could not hold his happiness and posted a photo of their newly born baby on his Instagram. In the photo, he was smiling with happiness and holding a baby. And he captioned,

His daughter's name is exactly not revealed at the moment as he does not call her by the original name. He calls his girl by the name LOVE. 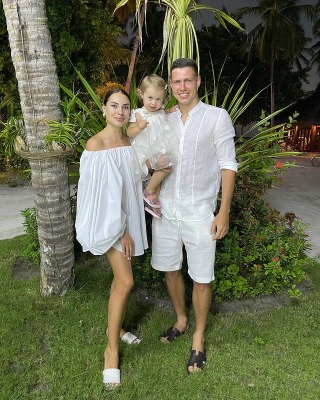 Mykola Matviyenko with his wife and baby SOURCE: [email protected]

He has been frequently sharing his daughter's photos on his Instagram. On her first birthday, he posted a beautiful family photo and said,

"My love! My most sunny and bright girl! Happy first birthday! I love.."

He is also a godfather of the child of his friend whose name is not known at the moment. In November of 2021, he posted a photo with the child and her parents. He thanked them for trusting him as a godfather. He said,

"On this bright day, I became the godfather of a little princess.Thank you parents for entrusting your daughter"

His Instagram id username is @koliamatvienko where he mostly posts about his games, training, and time with friends and families.

He is quite famous n Insta with more than 58,800 followers.