Mitch Unrein is an American professional football player who plays in the National Football League(NFL). As of 2019, Mitch Unrein currently plays for the Tampa Bay Buccaneers as their Defensive Tackle. Mitch Unrein has played for other teams like Chicago Bears, San Diego Chargers, Denver Broncos, Houston Texans.

Unrein has an estimated net worth of over $8 million and reportedly earns around $3,500,000 as his yearly salary from Tampa Bay Buccaneers. Mitch is married to his girlfriend Corey Cogdell in 2014.

Mitch Unrein's Net Worth and Salary

As of 2019, Mitch Unrein has an estimated net worth of over $8 million which is more than that of Kyle Lauletta. He reportedly signed a three-year contract worth $10,500,000 contract with Tampa Bay Buccaneers which also includes the total guaranteed sum of $4,000,000.

Mitch has an average salary of $3,500,000 annually and so far he has made earnings of $13 million from his entire NHL career.

After that, he was traded to San Diego where he signed a two-year contract worth$1.9 million in 2015. Moreover, his contract with Chicago includes a sum of $2.26 million for two years on March 13, 2016.

Mitch Unrein is married to his girlfriend Corey Cogdell on June 21, 2014, in Colorado Springs Colo. Eric Lars Bakke in front of family and friends.

The couple got married after being in a relationship for a long time. So far there is no news of them having a baby.

Mitch is living a happy married life with his wife since there are no rumors of their divorce or splitting disclosed on media. Talking about Mitch's past relationship. there are rumors that he married Susan Covelli in 2010.

Some of the websites mentioned about his earlier marriage but the details about their divorce are not yet disclosed on media.

Besides being a famous NFL star player, he is also a social media star having a huge number of fan followers on his official accounts.

Moreover, he has a height of 6 feet 4 inch and weighs around 136 kilograms and also he has a charming personality.

Mitch Unrein was born on March 25, 1987, in Eaton, Colorado to parents Mike and Kay. As per his nationality, he is American and belongs to the White ethnic group. Unrein grew up along with his siblings, Mike Unrein, Natalie Unrein, Michael Unrein.

Mitch Unrein attended Eaton high school, Colorado where he played for his high school football player team. After that, he joined Wyoming for playing college football.

Mitch began his NFL career with the Denver Broncos in 2012, and he has his 1st career touchdown pass from Peyton Manning. In addition to this, he played for several other teams like San Diego Chargers, Chicago Bears. 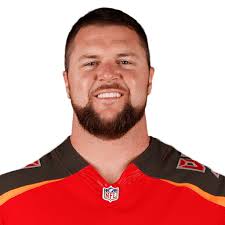 Currently, he is playing for the Tampa Bay under head coach Bruce Arians and alongside the captain Lavonte David.