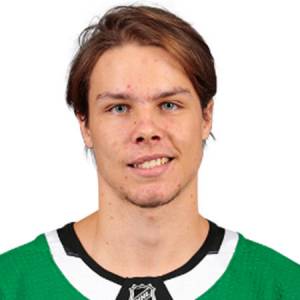 Miro Heiskanen is a Finnish professional Ice-hockey player who plays in the National Hockey League (NHL). As of 2018, Miro Heiskanen currently plays for the Dallas Stars as their Defence.

As a Defence, Miro Heiskanen reportedly earns around $3,425,000 as his yearly salary from Dallas Stars. Further, Miro Heiskanen has an estimated net worth of over $500 thousand.

Miro Heiskanen Net Worth and Salary

Heiskanen is not married but rumored to be in a relationship with his girlfriend. The couple has been dating each other for about two years. Apart from the pictures, the information about his girlfriend is not available in the media.

Exploring his Instagram account, he shares a picture with a girl frequently. So, we came to the conclusion that he has a girlfriend but hasn't disclosed details about her. With the reference, we assume he is happy from the relationship and enjoying his life with her.

Further, the couple is yet to reveal about their relationship in the media and might be waiting for the perfect time to get married. Heiskanen currently lives in the United States with his girlfriend.

Talking about his body measurement, the Famous NHL star is 6 ft 1 in (185 cm) in height and weighs around 185 lb (84 kg; 13 st 3 lb). Heiskanen's face is void of facial hair, speckled by adolescence. He's tall and lanky, even if his smooth stride masks what he lacks in bulk.

Miro Heiskanen was born on 18 July 1999 (age 19), in Espoo, Finland to parents Jukka Heiskanen and Mia Mattinen. Further, he is Finnish by nationality and belongs to Finns ethnic group. Further, his star sign is Cancer.

Heiskanen played in the Liiga club's youth program, HIFK, from the age of 14. In the junior level in the 2015-16 season, he recorded 14 points in 30 games and was awarded the Yrjö Hakala Award as the rookie of the year.

Heiskanen signed a three-year contract at the entry level with the Stars on 8 July 2017 and eventually, Heiskanen was loaned to HIFK for the 2017-18 season.

Heiskanen was named to the Stars' roster to begin the 2018-19 season and made his debut in a 3-0 win over the Arizona Coyotes on 4 October. Heiskanen scored his first NHL career goal against John Gibson on 25 October in a 5-2 win over the Anaheim Ducks off a Jason Spezza pass.

On 2 January 2019, Heiskanen was named the Stars representative at the 2019 National Hockey League All-Star Game, becoming the second rookie in the history of the Stars / North Stars franchise to be named in the All-Star Game.

Currently, he is playing under the coach Jim Montgomery along with his star team-mates such as Tyler Pitlick, Esa Lindell and many more.