Miles Simon is an American professional basketball player turned coach. He currently stands as an assistant coach for the Los Angeles Lakers of the National Basketball Association (NBA). Earlier, he held the same role at Arizona (2005-2008).

Stockholm, Sweden native Miles Simon was born on 21st November 1975, under the star sign Scorpio. His father is an American, while his mother is Norwegian. Simon did his high schooling at Mater Dei High School and played guard for the University of Arizona Wildcats men's basketball team.

Miles Simon's major source of income has always been basketball, whether from playing or as an analyst or coaching. The 1998 NBA draftee has just played few games for Orland Magic and then had an overseas career, becoming the most decorated player in the CBA league.

As reported, average salaries for an import player in the CBA are in the neighborhood of $1 million to $3 million as of 2021. However, during Simon's stint, he might earn $0.7 million per annum.

Currently, Simons serves as an assistant coach at Los Angeles Lakers. In NBA, assistant's salaries are anywhere from $300,000 to $1 million depending on their experience and success, reports say.

As of 2021, Miles Simons and his wife Kristy Simon will be celebrating their 12th anniversary. The couple tied the knot in July 2009 in a beautiful wedding ceremony. 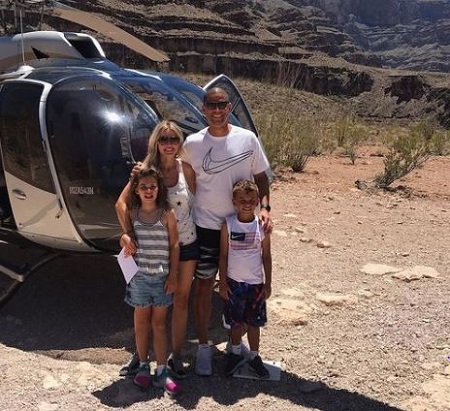 What's more? Mr. and Mrs. Simon are blessed with two children. In October of 2010, they welcomed their daughter, Sasha. In May 2013, the couple had their second child, a baby boy.

The Simon family is an open book. Both Miles and his wife often share their adorable family pictures via their respective account.

From NBA Player To Coach

Miles Simon was selected in the 1998 NBA Draft by the Orlando Magic with the 42nd overall pick in round two. He only played five games with the Orlando Magic. Then he had a brief stint with Maccabi Ra'anana, Hapole Holon, and Basket Livorno before joined Dakota Wizard in 2001.

He played two seasons for the Wizards of the CBA, leading the team to a CBA championship in 2002. Also, he earned various awards and honors at Dakota Wizards, making him the most decorated player in CBA history. He then played for Pallacanestro Varese in 2002 and gained a return to Dakota Wizards (2002-2003). In 2004, he appeared playing for Tuborg and then Pallacanestro Reggiana.

After retiring as a player, Simon was once again introduced to the basketball world but this time with a new role, an assistant coach at his alma mater in 2005. With Arizona, he won the conference championship and reaching the Elite Eight in March 2005. He served there until May 2008. Subsequently, Simon went on to work as an analyst with ESPN.

On 27th June 2017, Simon joined  Los Angeles Lakers as an assistant coach. He led the team to the 2020 NBA Championship after defeating Miami Heat in 6 games.